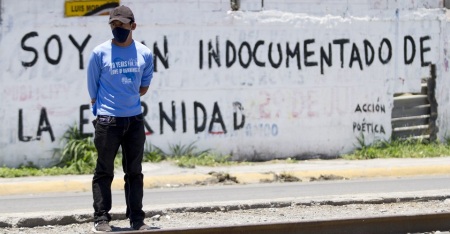 World Refugee Day, established by the UN in 2001, was celebrated on June 20th. It is especially relevant in Mexico to commemorate this day, not only because it is the eighth country in the world with the highest number of asylum requests in 2019, but also due to the large number of internal displacements in this country. According to the Mexican Commission for the Defense and Promotion of Human Rights (CMDPDH), it is estimated that there have been at least 338,405 internally displaced persons from 2006 to date.

Regarding the flow of migrants that passes through Mexico from the Central American countries to the United States, there has been a strong increase in recent years: in 2015, only 3,442 people requested refuge in Mexico. That number gradually rose to 70,709 in the past year.

Since 2013, approximately 150 thousand people have requested asylum in Mexico in total, of which only a third of these cases have been resolved to date. Of these, a total of 29,132 were recognized as refugees, while the rest received Complementary Protection or a rejection. Most of the accepted refugees in Mexico come from Honduras, Venezuela, El Salvador, Guatemala and Nicaragua.

For many years Mexico was only a transit country to the United States. But that has changed, especially due to the more restrictive immigration policy under President Donald Trump. Now the country is also becoming a destination for refugees, explains Andres Ramirez, general coordinator of the Mexican Commission for Refugee Assistance (COMAR).

However, the year 2020 broke with the trend of the migratory movement. Although in the first quarter of the year the number of applications increased compared to 2019, the emergence of the coronavirus completely cut off the flow of migrants. For as long as the inhumane conditions prevailing in the migratory stations in Mexico during the pandemic have been pointed out, they constitute a very high risk of contagion from the virus. Because of this, many refugees have even expressed the desire to return to their country of origin, but in more than one case they have found the borders of their countries closed by the same pandemic.

National/International: HRW Asks Mexico for “Immediate” Release of All Detained Immigrants Due to Coronavirus (April 19, 2020)