National: Commemoration of two years of the MPJD 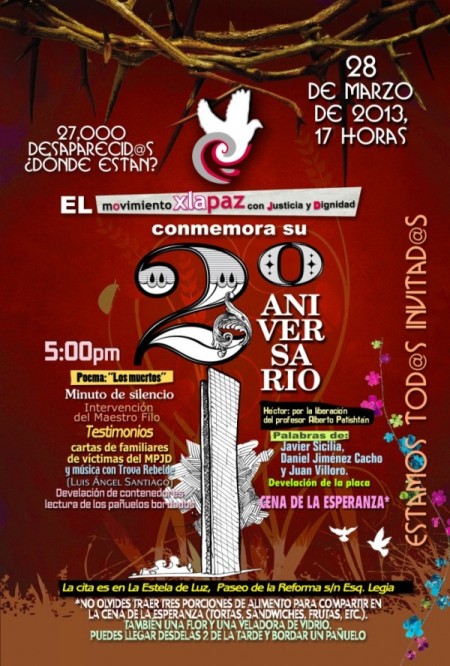 On 28 March, two years after the murder of the son of the poet Javier Sicilia, which gave rise to the Movement for Peace with Justice and Dignity (MPJD), there was held a series of actions to commemorate this date in Cuernavaca (Morelos), Mexico City, Chiapas, and even Tokyo, Japan.At the Mexico City event, Javier Sicilia declared that two years after the MPJD’s beginnings, there persists “a suffering that does not see any sort of justice or peace,” although he also indicated that “all commemorative dates are also times during which we stop to think, would it not be worth it to simply leave our pain inside […]?”  He indicated in this sense that there have been advances in three respects: the visibilization of victims, the State’s taking acceptance of responsibility, and the creation of the General Law on Victims.Regarding the future of the MPJD, Sicilia identified three aspects.  With regard to the Law on Victims, he said that the MPJD would maintain “an absolute vigilance for the real application of the General Law of Victims throughout the country […].  The only reasons that we see as serving as obstacles for this are bad faith, disparagement, ignorance, and solidarity with organized crime.”

Sicilia also demanded that the Estela de Luz, where the event was held, be transformed “not only into a center of documentation of the memory of all victims in the country, but rather a cultural center for peace.”  It should be mentioned that until 8 May, there will be carried out a campaign to collect signatures at www.change.org/esteladepaz toward this end.

Finally, Sicilia announced that the MPJD would continue to collaborate with U.S. organizations that participated in the Caravan for Peace (August-September 2012), given that “there will be no peace as long as on the other side of the border, there is no regulation of the consumption of drugs or of control of the weapons of extermination.”

Binational: Presentation of the “Caravan for Peace of the MPJD in the United States”

In a 18 June press-conference, the Movement for Peace with Justice and Dignity (MPJD), Mexican and U.S. organizations, including the National Alliance of Latin American and Caribbean Communities (NALACC), Labor Council for Latin American Advancement (LCLAA), Law Enforcement Against Prohibition (LEAP), Border Angels, Latin America Working Group (LAWG), Drug Policy Alliance (DPA), National Association for the Advancement of Colored People (NAACP), Washington Office on Latin America (WOLA), and  Global Exchange announced a Caravan for Peace that would in the near future carried out by the MPJD in the U.S.

The Caravan will travel over 9,400 kilometers, leaving on 12 August from San Diego, California, and ending on 10 September in Washington DC, visiting during this route more than 20 U.S. cities.  Its objective is to “commit itself to the politically active citizenry of the U.S. so as to arrest the paradigm of war on drugs that is advanced by the Obama administration, and to initiate a process of recovery from the national emergency that has devastated large parts of Mexico, as well as historically vulnerable communities in the U.S.”  Javier Sicilia, leader of the MPJD, stressed that the caravan is not interested in electoral politics but seeks instead to develop a transnational strategy of peace and solidarity to end the war.

Mexico: MPJD commemorates the anniversary of its victims in Cuernavaca (3 April 2012)

Mexico: New murder of person linked to the Movement for Peace with Justice and Dignity (13 December 2011)

Mexico: Member of the Movement for Peace with Justice and Dignity is murdered (18 December 2011)

Mexico: Second meeting of the MPJD with the Executive (18 October 2011) 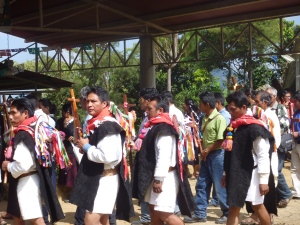 On 22 June 2011, during the monthly commemoration of the Acteal massacre, the Las Abejas Civil Society of Acteal published a communiqué which welcomed Javier Sicilia’s Pact of Peace: “From the sacred lands of Acteal, surrounded by mountains and peaks that were witnesses of the blood that was shed here 13 years and 6 months ago, we recognize our brothers and sisters in the Caravan for Peace who went to Ciudad Juárez.  We salute all those who have been victimized by this war that is destroying our country–a war, it is called, against criminals.  In reality it is unknown where one ends and the other begins.”

The document stresses that “from this sacred land of Acteal we welcome Javier Sicilia’s proposal to refound Mexico, to create a new social contract, and that this refoundation be found in the blood of the victims, who have suffered precisely because the social contract between Mexicans and our authorities has not been respected.  The primary duty of the government is to guarantee the respect for the human rights of its citizenry.  This it has done neither for the victims of the Acteal massacre nor with the 40,000 dead in Felipe Caldedón’s war.  The government has not only not fulfilled its duty in this sense but has rather done the contrary of what it should, being the principally responsible party of the Acteal massacre.  Perhaps we cannot say the same directly as regards the 40,000 killed in this six-year period, but what we can say is that the government has failed to protect the life and integrity of Mexicans.”

Chiapas: the Civil Society Las Abejas carries out day of fasting and prayer for peace (25 February 2011)

Chiapas: communiqué of Las Abejas in observation of the monthly celebration of the Acteal massacre (26 January 2011)

Mexico: Beginning of the caravan for Peace from Cuernavaca to Ciudad Juárez 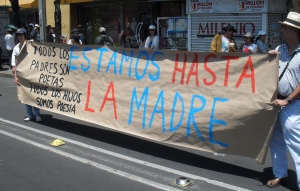 On Saturday 4 June began the Citizens Caravan for Peace with Justice and Dignity, “also called the caravan of consolation for the route of pain and blood,” as emphasized by its spokesperson Rocato Bablot.  It has been organized by the Network for Peace and Justice headed by Javier Sicilia and will visit the nation starting in Mexico City, then continuing on to Morelia, San Luis Potosí, Zacatecas, Durango, Saltillo, Monterrey, Torreón, and Chihuahua before ending in Ciudad Juárez on 9 June, to carry out the meeting planned for 10 June.  The caravan is made up of approximately 600 persons.

On the second day of the trip to Ciudad Juárez, in the capital of San Luis Potosí, Javier Sicilia called on the citizenry to leave aside hatred and instead find social unity so as to promote change.  He stressed, “Enough of hatred.  Let us hope that the pain we suffer, which is immense, will not serve to build hate […].  Peace is built with dignity, making visible the horror of violence.”

Olga Reyes Salazar demanded that one must “go out and show [one’s] pain.  There are many people who have been killed, many disappeared, much unemployment, the children in the ABC nursery.  We will not silence our voices.”

Emilio Álvarez Icaza, the ex-ombudsman of the capital, stressed that the waste of resources experienced during electoral campaigns contrasts with the lack of opportunities the youth have to develop themselves.  He indicated that the problem should be seen from a more social perspective, channeling resources to offer options for the youth.

Pietro Aneclio, from the Network for Peace and Justice, declared that for the moment the possibility of dialogue finds itself “frozen,” due primarily to the posture assumed by the federal government and President Felipe Calderón, which is to send more troops to Ciudad Juárez and to insist on militarizing the country.

Mexico: Marches for Peace and Justice with Dignity (12 May 2011)

Chiapas: Communiqué by the EZLN: For reflective criticism, individuals and collectives (15 April 2011)