Chiapas: Violence increases in the Highlands of Chiapas, 747 displaced and 3 dead in Aldama

Armed violence by armed groups with paramilitary characteristics in the Highlands of Chiapas, which forced more than 5,000 people to flee their homes in recent months, intensified with the murder of three peasants and the forced displacement of more than 700 people in the municipality of Aldama.

A peasant and his two minor children were murdered on April 2 when they were walking around their land near one of the alleged meeting points of “paramilitary groups” that operate from Manuel Utrilla, Santa Martha in the municipality of Chenalhó, firing at the civil population in the neighboring municipality of Aldama supposedly due to a territorial conflict of 60 hectares.

During a press conference held on April 3 at the Fray Bartolomé de las Casas Human Rights Center, the 115 Communal Property Owners of Aldama demanded to respect the agreement ratified by the Agrarian Tribunal on December 1 2009, where the inhabitants of Santa Martha, Chenalhó, recognized that the 60 hectares in conflict belong to the municipality of Aldama.

“The current situation we are experiencing in our community of Aldama is that we are being attacked in our communities by armed groups from Santa Martha. Every night they are shooting with high caliber firearms against the communities that have already been displaced and other communities of Aldama that are neighbors of Santa Martha. They have also attacked the county town, as well as people who are going to theirs lands; they do not allow us to work, where they see us quickly they attack us, that is why we are very afraid because anyone they see will be shot“, said one of the inhabitants of Aldama.

The Fray Bartolomé de Las Casas Human Rights Center pointed out that the impunity with which armed civilian groups operate in the Highlands of Chiapas has intensified forced displacement in communities of Tsotsil peoples, in the municipalities of Aldama, Chalchihuitán and Chenalhó.

“Armed civilian groups, of paramilitary nature, linked to organized crime networks, attack communities with firearms, with the permissiveness and protection of authorities of the government of Chiapas. Old agrarian conflicts are managed according to political interests, in an electoral environment of manipulation and control to operate renewed counterinsurgency strategies”, it affirmed.

For more information (in Spanish) :

For more information from SIPAZ :

Chiapas: Agrarian Conflict between the Municipalities of Chenalho and Chalchihuitan Reignites November 19, 2017

Chiapas: Death-threats and physical attacks against BAEZLN in the Tzakukum community 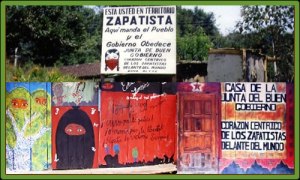 The support-bases of the Zapatista Army of National Liberation (BAEZLN) in the Tzakukum community, official municipality of Chalchihuitán, have been threatened with death for months and have incurred physical aggressions. On 9 September, the Fray Bartolomé de Las Casas Center for Human Rights A.C. (Frayba) documented the threats and harassment against the BAEZLN. The information was provided by the Good-Government Council of Oventik, Central Heart of the Zapatistas before the World (Oventik JBG), which pertains to Caracol II, Resistance and Rebellion for Humanity.

According to testimony, the BAEZLN reported having been threatened with death on multiple occasions. On 10 August 2015, the BAEZLN Aurelio Gómez Girón was threatened with death by machete by a woman and man from the PRI, who then cut the water-house supplying Mariano García Núñez, another BAEZLN, who in turn was threatened with death by machete. On 14 August Librado Pérez Núñez, BAEZLN, was insulted and attacked on the path by a PRI leader who told him, “You are murderers. Little Zapatista, what are you doing here?” On 26 July a group of party militants detained four BAEZLN, threatening to burn them with gasoline. Beyond this, the bulletin mentions more examples that underline the urgency of the situation. The victims indicated that a group of approximately 25 people harassed and threatened them. In light of these acts, Frayba noted that “We are concerned that the authorities of Chiapas state encourage human-rights violations by being absent when attacks are directed against the BAEZLN.” The bulletin stresses that “these human-rights violations in Tzakukum take place within a context of counterinsurgency that is implemented by the Mexican State against Zapatista autonomy.”

It bears recalling that there were antecedents of this conflict in the same community in July 2015, when members of the Institutional Revolutionary Party (PRI) began to build a school on common lands without consulting the BAEZLN, who insisted that the agreements on land be respected. In this sense, Frayba intervened toward the end of having the denounced acts be attended to. It is feared that for this reason the PRI members were angered and struck out, after having had to abandon the project on common lands.

Chiapas: Risks to the lives of Zapatista support-bases (BAEZLN) (3 July 2015)

Chiapas: mining reactivation is reported in the state

In a statement released on February 14, the Human Rights Committee Digna Ochoa in Chiapas affirmed that it had received a copy of a letter addressed to the priest of Simojovel, Marcelo Perez Perez, which was signed by Dr. Juan Carlos Salinas Prieto representative of the Mexican Geological Service and of the firm Geochemistry and Drilling Company SA de CV (GYMSA). In this letter, the priest was asked to intercede with the representations of the indigenous communities “to access their private and communal territories, and where, in a period of time of three months, he “has programmed to carry out geological mapping of the region comprised of the municipalities of Jitotol de Zaragoza, Pueblo Nuevo Solistahuacán, Bochil, San Andrés Duraznal, El Bosque, Simojovel, Huitipán, Tapilula, Rayon, Pantepec, Allende Esquipulas, Las Maravillas, Union Zaragoza, Carmen Zacatal,Álvaro Obregón, Rincon Chamula, Competition, El Bosque, Sabanilla, Tila, Tumbalá, Yajalón, Sitalá, San Juan Cancuc, Pantelhó and Chalchihuitán”.

The Committee Digna Ochoa expressed that it “confirms that the government of Chiapas and mining companies are going for more territories and municipalities in the Northern region and Highlands of Chiapas and that the threat of looting and plunder is at the door of peasants and indigenous territories’ lands. (…) A door is opened to legalize the dispossession of land and resources belonging to hundreds of communities and indigenous and peasants peoples without an effective tool of legal defense such as the community consultation supported by ILO Convention 169”.

On February 11, the Believing People of the parish of Santa Catarina Pantelho organized a demonstration in the county seat of this municipality to announce its total rejection of the company GYMSA arrival.

In the last three governments in Chiapas, 144 mining concessions for exploration or exploitation have been granted (some of them for up to 50 years). Recently, in the natural reserve “El Triunfo”, municipality, and after months of opposition, the landowners gave up some plots to a Chinese company it is said for three million pesos per hectare.

For more information from SIPAZ (in English)

Chiapas: Third Forum for the Defense and Care of Mother Earth in Chicomuselo (December 6, 2014)

On 22 July, during the monthly commemoration of the Acteal massacre of 1997, the Las Abejas Civil Society released a new communique positioning itself on several prevailing realities, “because it is our responsibility to say the truth and condemn lies, violence, and war.”  Las Abejas denounced that the “bad government of Mexico has coordinated with large neoliberal-capitalist interests to create plans to extract the riches of our Mother Earth.  These plans criminalize social movements; they imprison women and men who criticize the rotten system in Mexico.”  They gave as examples of such tendencies the murders of Juan Vázquez Guzmán and Juan Carlos Gómez Silvano from the San Sebastián Bachajon ejido, who adhered to the Sixth Declaration of the Lacandona Jungle, in addition to the Zapatista support-base (BAEZLN) Galeano in La Realidad.

Las Abejas indicated that “we are saddened that still many of our brothers and sisters who do the dirty work of the government see us as enemies, insulting us and claiming us to be provocateurs.  All these thoughts that they have are the result of the crumbs given in the ‘Procampo,’ ‘Opportunities,’ and other welfare programs.”  They stressed the role of the “so-called leaders of a community or an organization”: “the bad government seeks to create divisions in a community or organization in resistance by offering a bit of money or a public office in exchange for providing information on what the organizations are doing.”  To illustrate this point, Las Abejas made reference to the “present conflict between the neighboring communities of Ch’enalvo’ and Chalchihuitan regarding the land dispute that has gone on for 40 years.”  They reiterated the call to dialogue “both to the peoples of Ch’enalvo’ and of Chalchihuitan and not to take up arms.”

Lastly, they shared a message of solidarity with the Palestinian people.

Chiapas: Resurgence of the agrarian conflict between the neighboring municipalities of Chenalhó and Chalchihuitán

Recently, the territorial and agrarian conflict between the municipalities of Chalchihuitán and Chenalhó has worsened once again. It’s linked to a dispute over more than 900 hectares located in the boundaries between the two entities. It’s an old conflict that started in 1973 with the work of recognition and certification of the common lands of both villages by the former Department of Agrarian Reform–at present, the Ministry for Agricultural, Territorial and Urban Development (SEDATU). When the measurements were made, the limits respected by both villages (the river as a natural boundary) were not taken into account. As a result, and intermittently, tensions have appeared, some that the populations attempted to resolve in court, others that led to theft, destruction of crops, land invasions, and even murder (2008).

On May 13, officials of the state government and of SEDATU decided that Chenalhó should receive a compensation of 15 million pesos in exchange for giving the lands in dispute to Chalchihuitán. On May 15, the residents of the municipality of Chenalhó rejected the payment. They entered the disputed land and destroyed several landmarks marking the boundaries. Several witnesses report that shots were heard, although no injuries were reported. Both sides accuse each other of using firearms.

On May 28, the Parish Council of Chenalhó called on the parties “to put aside every word and every action that can lead to violence and to realize that this conflict between brothers should be resolved through peaceful dialogue.” They asked the three levels of government to recognize that “this problem is due largely to their own irresponsibility.” They invited them to realize “that not everything can be fixed with money as they think. The authorities must understand what justice should be the first to respect the laws so as to set an example for the people. They should be open to respectful dialogue and should be aware that they can not solve any problem if they do not allow free and responsible participation of the people.”

On May 22, the Las Abejas Civil Society also referred to the land problem between Chalchihuitán and Chenalhó, noting: “If the called Agrarian Reform (now defunct), had not made a bad execution in defining the territorial limits, there wouldn’t be problems between the two Tzotzil peoples. We regret that this old conflict has not been resolved to date, because, sadly, political and economic interests of the same agrarian and municipal authorities and of some private individuals interfere to do so. Instead of resorting to wisdom and the ancestral mode of dialogue to solve problems between brothers, they have chosen the path of institutional dialogue that always end up manipulated politically and economically. Hopefully someday those who still believe in evil government will understand that the conflicts and political differences that have led to killings and massacres in our villages have been planned and fostered from above, by the bad government itself. “