Chiapas: Lawyer of the ejidal committee of those affected by the Chicoasén II dam arrested 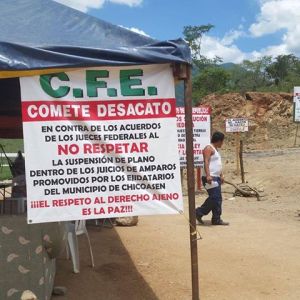 On 21 October, state police arrested Arturo Ortega Luna, an activist opposed to the construction of the Chicoasén II hydroelectric dam and lawyer for the affected ejidatarios, “accused of the crime of mutiny following an investigation headed by the Chiapas Attorney General’s Office (PGJE).” This was the denunciation made by the Fray Bartolomé de Las Casas Center for Human Rights (CDHFBC) in a communique from 23 October. The lawyer was arrested at a checkpoint in Tuxtla Gutierrez and is currently being held in the El Amate prison in the Cintalapa municipality. According to the communique, the penal denunciation was submitted by the Federal Electricity Commission (CFE), which “seeks to criminalize protest amidst the arbitrariness perpetuated by the federal and state governments.”

Arturo Ortega Luna has joined the defense of the ejidatarios to prevent the construction of the dam, which would affect more than 180 hectares of ejidal lands used for agricultural purposes by Zoque indigenous people. Ecologists have denounced that “the project will deteriorate and fragment the Grijalva River, this only to satisfy the energy demand of the eastern region of Mexico.” According to a bulletin published by the CDHFBC following a press conference on “Violations of agrarian rights and the judicialization of those affected by the Chicoasén II dam” on 27 October, “the ejidatarios affected by the Chicoasén dam have carried out various peaceful and legitimate actions to avoid the progression of the construction of the hydroelectric project that would affect their lands.” On 9 October, the ejidatarios won a legal motion before the Collegiate Tribunal that demanded the suspension of the existing construction plan, though this ruling has gone ignored to date. 52 individual legal motions in process remain pending, and all involve the detained lawyer. The CDHFBC has held that his arrest “is an act of criminalization and harassment that corresponds to his actions in defense of the lands amidst looting […] which if carried out would imply the displacement of dozens of families.” The ejidatarios are confronting harassment due to their defense of their agrarian rights, though there exist formal agreements that were signed in July 2015 whereby the Chiapas state government committed itself to not prosecute those who defend their agrarian rights. 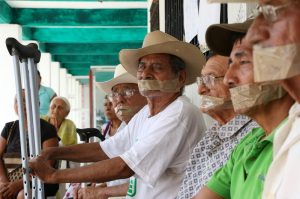 Hunger-strike against the construction of the CFE (@Educa)

On 3 November, elder males and females who have been affected by the construction of the Chicoasén II dam in the Chicoasén municipality undertook a hunger-strike to demand the release of their lawyer Arturo Ortega Luna, who was arrested on 21 October. In an urgent communique, the campesinos reported that “those who will be on hunger strike are at risk of having charges fabricated against them by the government, as it did the last time with the State Attorney General’s Office, given that municipal and state police and the Mexican Army are patrolling through our streets.” They indicated that the detained lawyer, who was assisting them in their defense against the construction of the dam-project, “was arrested unjustly, accused of a mutiny by the Federal Electricity Commission (CFE).” The ejidatarios demanded that the more than 10 arrest-orders against other members of the ejidal committee and associated lawyers be suspended.

With their hunger-strike, the ejidatarios denounced the judicial persecution and threat against their agrarian rights, in light of the looting of land implied by the project. They have demanded just reparations for the loss of their lands as well as respect for the legal motion affirmed by a federal judge in May 2015 mandating the suspension of the dam-project. Avisaín Solís López, an ejidatario who has been affected by the dam’s construction, added that the state governor, Manuel Velasco Coello, “said that he would not allow the construction of any more dams that would violate the rights of peasants in Chiapas, but now we defend our rights, having received only lies.” Those affected seek to maintain their hunger-strike until the government attends to them, releases their lawyer, and respects their rights as indigenous people.