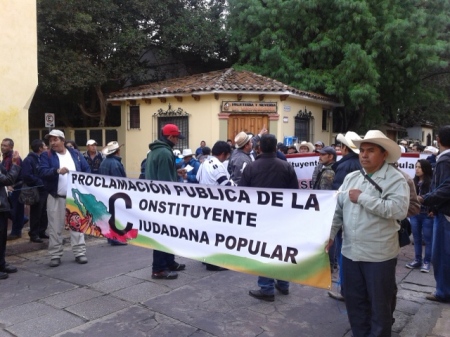 On 5 December, more than 15,000 people, the majority of them indigenous, as well as representatives from seven countries in Central and South America, marched and held a rally in San Cristóbal de Las Casas to proclaim the Popular Citizens’ Constitutional Power. This initiative seeks to establish the basis for a new political Constitution in Mexico, which would refound the nation and lead to a new social contract.

Raúl Vera López, former assistant bishop of San Cristóbal de Las Casas and present bishop of Saltillo, Coahuila, led the event at which the indigenous protestors gave him a command scepter. The bishop acknowledged that the Zapatista uprising of 1994 represented the “ferment” of a new constitutional power, but that at present “it it not just our Mayan brothers and sisters who seek a new social contract, but rather all Mexicans.” He asserted that “we do not want this deviation of power whereby the authority we delegate in a government becomes perverse, placing our resources and lands in the hands of multinational corporations and their home governments and states. Instead, these must be placed at the service of all Mexicans who want peace with justice and development with dignity.”

The Council of the Popular Citizens’ Constitutional Power in Chiapas stressed that “today is an historical day that will be remembered throughout Chiapas and Mexico, because the presence of thousands of people is a clear demonstration that the people have recognized how disastrous our living conditions are, and have armed themselves with valor and dignity, taking on the responsibility of transforming this reality.”

On 5 February, in observance of the anniversary of the entrance into law of the current Mexican Constitution, parents of the 43 disappeared students from Ayotzinapa, Guerrero, together with Raúl Vera, bishop of Saltillo, Coahuila, the priest Alejandro Solalinde, the poet Javier Sicilia, and the artist Francisco Toledo, together with members of human-rights organizations, churches, campesino organizations, and unions participated in the public presentation of the initiative for a Popular Citizens’ Constitution.  The organizational call notes in this sense that “we call on civil society, women and men, without importance to creed, gender diversity, or social class to advance with the refoundation of the nation; to progress toward the creation of a new constitution that bases elections on democracy, ensures that the representatives of a new congress be subject to the will of the people, and forever buries all types of juridical and economic forms of organization that merely make the people into commodities to be plundered.  This constitution must put an end to impunity, racism, and patriarchy.  To serve and to lead by obeying must be the new conditions of those who become representative of civil society.”

Following a series of sessions throughout the country during the past 11 months, the partisans of the Citizens’ Constitution explained the necessity of “refounding the country.”  Toward this end 20 points have been presented, including guarantees for human rights and union organizing, beyond the implementation of a convention on the elimination of all forms of discrimination against women.

There was also announced a planned meeting on 21 March “to discuss the political reality of the countryin terms of the elections for this year.”  Beyond this, there was made a call for the First National Assembly of the Committee for National Refoundation that will be held on 2 May.

Chiapas/National: Bishops of southern Mexico pronounce themselves on the “drama of migration”

At the end of January, the Episcopalian Pastoral Commission for Human Mobility, part of the Conference of the Mexican Episcopals (CEM), held a three-day meeting in Tapachula with the participation of nine bishops working in the southern states of Chiapas, Tabasco, Yucatán, Oaxaca, Campeche, and Veracruz. At the end of the meeting, in the document entitled “No to Indifference before the Drama of Migration,” the bishops pronounced themselves, declaring that “the Church is not indifferent to this drama.  The constant calls from the Pope and the bishops in light of this reality are a voice for the conscience of Christians and those who should offer efficient responses to society before this situation.  This is a voice that is lamentably not heard, above all by those who with their criminal practices make each day that passes more painful and more insecure for so many of our Central America brothers.”

Furthermore, they emphasized that “to the authorities we want to remind them to address the question of migration with more gravity in all aspects: above all, working decisively to promote dignified sources of work, the only way forward to eradicate poverty, which is a fundamental factor in this human drama.  It is urgent moreover to find and guarantee physical and legal security for those who transit through our territory.  Hospitality and the human values of Mexicans cannot be allowed to continue deteriorating due to external political interests or pressures.  The policy in this country should be defined by the values and principles of solidarity and respect for human life and dignity, as enshrined in our Constitution.”