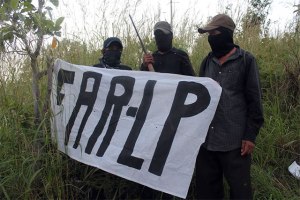 Guerrillas from the FAR-LP. Photo @Excelsior

“The return to armed struggle is essential: if now you are quiet, that you be heard among the people and in the cities, on the coasts and through the valleys, on the pathways of the south and throughout the world,” said the new guerrilla group Revolutionary Armed Forces-Liberation of the People (FAR-LP) on 2 December, when it announced its public presence to the world from Guerrero.

The new insurgent group calls for armed struggle in light of the violence and repression exercised by the federal and state governments against the social movement and the imposition of reforms that violate the rights and interests of society.  “What more should we expect from these governments, than that they will annihilate us?  The war against the people as a State policy has resulted in a repressive offensive based in its counter-insurgent bias against social activists, popular organizations, human-rights defenders, journalists, communal leaders, women’s rights activists, student representatives, and all those who raise their voices in defense of the people become the enemy of the State.”

The FAR-LP affirms having a presence in the Guerrero regions of the Mountain, Costa Chica, and Acapulco.