National: Nomination of new head of the Mechanism of Protection for Human-Rights Defenders and Journalists

On 2 May, the Secretary for Governance reported that Sara Irene Herrerías Guerra was named the new head of the Institute for the Defense of Human Rights within this agency.  She will be responsible for the Mechanism of Protection for Human-Rights Defenders and Journalists, making links with national and international organizations, as well as coordinating, orienting, and following up with the work for the protection and defense of human rights that is done in different federal institutions.

Herrerías Guerra was a social judge attending to victims of federal crimes and special prosecutor for violent crimes against women and human trafficking.

National/International: PBI and WOLA publish report on Mechanism of Protection for Human-Rights Defenders and Journalists in Mexico (10 February 2015)

National: A delicate moment for the Mechanism for the Protection of Rights Defenders and Journalists (30 March 2014)

National: launching of Consultative Council of Mechanism for Protection of Journalists and Rights-Defenders (26 October 2012)

National: According to the pre-audience for the People’s Permanent Tribunal (TPP), simulation and impunity prevent the eradication of violence against women 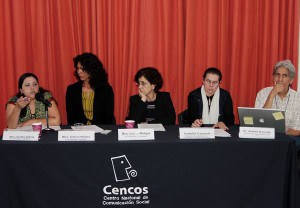 Between August 4 to 6, there was held in Mexico City the pre-audience “Gender Violence and Femicide” of the the Peoples’ Permanent Tribunal (TPP), Chapter Mexico. This time 18 cases were analyzed and the different types of violence against women that happen in the country, such as femicide, discrimination, criminalization, labor violence, attacks on journalists and presenters, obstetric violence and human trafficking, were demonstrated. The jury accused the Mexican government of not fulfilling its obligation to eradicate violence and discrimination against women. According to the jury, laws, institutions and state actions do not generate concrete results in combating violence, and especially do not guarantee neither protection nor effective access to justice. It declared: “Legal changes are achieved, yes […] but in the end, the State justifies itself and doesn’t assume the contents of those law […] and that is serious, because it undermines the right of women to live without violence”. Besides the Jury stressed that in all cases reported to the TPP, there have been no follow-up, penalty or damage repair and in some cases, victims have been criminalized. The Mexican government, it said, through “simulation and impunity,” violates international treaties it has signed and ratified, affecting the right of women to a life free of violence, and therefore all their rights.

Finally, it recalled that the final hearing of the axis “Femicide, family and sexual violence, disappearance and human trafficking, women in war, defenders and structural violence” of the TPP will be held in September. In November, after three years of work, the TPP Mexican Chapter will conclude with a final hearing, in which the Mexican government will be judged by a national and international commission.

National: the Mexican government does not comply with the recommendations of the Committee for the Elimination of Discrimination against Women (CEDAW) (23 June 2014)