Chiapas: La Pimienta protest over lack of observance of agreements made after the death of two infants due to negligence

Close to a thousand residents of La Pimienta, Simojovel municipality, Chiapas, occupied City Hall and marched in protest due to the failure of justice for the deaths of two infants and the sequelae suffered by another 29 following the application of expired immunizations by the Mexican Institute for Social Insurance (IMSS) last May.

Following this tragedy, locals from La Pimienta demanded that the state government clarify the events, and it responded by committing itself to offering “medical attention, rehabilitation of the clinic, changes in institutions, improved functioning, supply of medicines, and the finishing of the asphalt road to Simojovel from La Pimienta, beyond constructing two vehicular bridges and the rehabilitation of schools and other educational institutions,” according to Revolución Tres Punto Cero. Despite having signed the agreement, the government has not followed through to date. In the words of a resident from La Pimienta, “we realized that the accords that were signed are only commitments, because six months after the deaths of the two infants and the 29 others who continue to suffer sequelae, the government has not intention of observing any of its ‘promises.’”

After six months of failure to observe the accords, residents of La Pimienta mobilized to express their repudiation of the Chiapas state governor, Manuel Velasco Coello, as well as the mass media, “because they have offended and hurt us, beyond attacking our human dignity, by assuring that the authorities have in fact observed their word. For this reason we call on the government to implement its agreements, but above all to guarantee the health of the 29 infants and to compensate damages incurred,” noted the spokespeople.

Chiapas: Pilgrimage in Simojovel to demand justice and truth amidst deaths of infants (9 June 2015)

Chiapas: Pilgrimage in Simojovel to demand justice and truth amidst deaths of infants 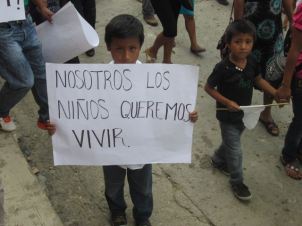 On 23 May, some 2000 people, including residents of the La Pimienta community and members of the Believing People, an organizational process that pertains to the San Cristóbal de Las Casas diocese, carried out a pilgrimage from Simojovel to said community where two children died recently, with another 29 hospitalized, after the application of immunizations. The objective was to protest against the public-health institutions, and to denounce the offer of compensation of 5,000 pesos from the state government to the families of the 31 affected children.

Upon the march’s arrival to La Pimienta, a communique was read that asserts that “we will not exchange our children for 5000 pesos, as is offered by Manuel Velasco’s government. That proposal is to us more than insulting. We do not have the words to describe our outrage. Life is not worth 5,000 pesos.”

Protestors challenged the official version presented by the Mexican Institute for Social Welfare (IMSS) and the Federal Commission for the Prevention of Health Risks (COFEPRIS) that indicates that 2 children died and 29 became ill not due to the immunizations that they had, but rather because of the way in which medical personnel applied them. Protestors claimed not to believe this story, “because there is no transparency.”

They also warned that “whoever tries to guarantee us that these 29 infants will turn out all right: what will happen if in 5 years they contract cancer, or some other incurable disease? If that happens, the government will say that it was due to lack of food and proper care. We are all concerned by this, that they may not turn out well, and that later we will have to leave our communities to access hospitals, thus spending what little money we have. For this reason, the government is responsible for everything, and it is not just this government, but also the ones to come.”

Following the application of an immunization campaign to 52 indigenous children from the Simojovel municipality, 29 of them had adverse reactions and had to be hospitalized.  Two have died, and six others have been seriously injured.  The perished neonates, Yadira (30 days of age) and Emmanuel Francisco (28 days), had not yet been officially registered.

The Mexican Social Security Institute (IMSS) announced on 9 May that it would suspend only the application of Hepatitis B immunizations within the Simojovel municipality, thus overturning the previous order to suspend the BCG (tuberculosis), Hepatitis B, Rotavirus, and Quadrivalent immunizations at the national level, and to contain the Hepatitis B lots as the suspected cause of the adverse reactions.

The Chiapas state governor, Manuel Velasco, and the director general of the IMSS, José Antonio González Anaya, visited those affected and their relatives in the Tuxtla Gutiérrez, where they have been admitted.

Civil-society organizations have demanded that the State authorities investigate the incident in  a profound and impartial way, and they called on the appropriate authorities to determine the chain of culpability among those responsible, as well as to provide the necessary support for families, in addition to access to justice.  They expressed their “concern for the situation of newborns in the State, particularly those who subsist in conditions of extreme material poverty.  Data from the National Council on the Evaluation of the Politics of Social Development (CONEVAL) indicate that, in 2012, 74.7% of the Chiapas population finds itself in extreme poverty, with 24.9% reporting lack of access to health services.  It is notable that this outcome, which has to do with immunizations, takes place in one of the states with greatest material need in the country, where the percentage of unvaccinated children is 18%, and the mortality rate of infants is 13.5 deaths higher than the national average of 13.2 (2010), in accordance with the official data that are presented in the report Infancy Counts in Mexico.”