Chiapas: new threats against the priest and members of the Believing People in Simojovel 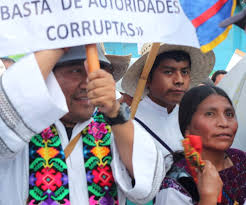 In a communique published on 22 June, members of the parish of San Antonio de Padúa, Simojovel municipality, denounced that, since 16 June, death-threats have been on the rise against Father Marcelo Pérez, catechists, and members of the Parish Council and Believing People, thus putting at risk their lives and physical and psychological integrity. This increase has presented itself following the arrest of Juan Gómez Domínguez, a former PRI mayor, and two of his accomplices, given that “the PRI leaders from different communities hold the Believing People and Pérez Pérez responsible for these arrests, such that now we have entered a high-risk situation.”

Within these new aggressions, the Simojovel Catholics detail that on 16 June, PRI militants “met at the offices of the National Campesino Confederation, several of them carrying machetes, sticks, and gasoline amphoras. Even at night, they went to buy more gasoline, and during the day it was heard that they would attack the church and remove the priest forcibly to kill him.” Beyond this, on 20 June, “a parish council that has been awarded precautionary measures by the Inter-American Commission on Human Rights (IACHR) received strong threats against its person and family, leading them to decide to leave and seek out refuge in another municipality for some days.” Two days later, 10 people “strongly armed harassed the CIRSA offices, being a cooperative created by the Catholic Church, whose board members work in the Church, yet no valuable objects were stolen.” That same day in Bochil, close to Simojovel, four people in a parked car were overheard saying, “We are going to decapitate Father Marcelo from Simojovel. We are just finding the right time to do so, given all the fucked-up things he does.”

It should be recalled that for the past year, the Catholics from Simojovel have through pilgrimages demanded the closure of cantinas and sex-houses, and that the sale of drugs and arms in the zone be curtailed. The result is the death-threats they now confront.