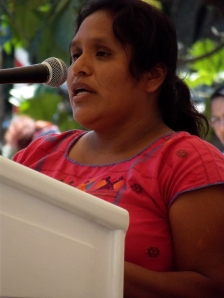 In observation of the International Human Rights Day (10 December), the National Network of Civil Human Rights Organizations “All Rights for All” (TDT Network) sent a letter to the state governor of Guerrero, Ángel Aguirre Rivero, to warn that the state is one of the most dangerous places for journalists, activists, and human-rights defenders.  Different civil organizations have urged the governor to provide instructions to guarantee their security and protection.  In the public letter are recalled aggressions, murders, and disappearances of activists such as Eva Alarcón y Marcial Bautista (whose whereabouts have been unknown since 7 December 2011) and Jorge Alexis Herrera Pino and Gabriel Echeverría de Jesus, students from the Rural Normal School of Ayotzinapa (murdered on 12 December 2011), among others.

On 23 October, the UN Human Rights Council showed in the Universal Periodic Review (UPR) that Mexican women who advance social causes and engage in journalist are attacked with insufficient attention being provided to the question by authorities.  In accordance with data from the TDT Network, from 2010 to 2012 there were registered 25 murders of human-rights defenders, with 118 attacks and seven murders of such workers in 2012 alone.  In 99% of the denounced cases there have been no arrests, and for this reason impunity prevails.  The TDT Network is comprised of 74 organizations from 20 states, including the Migrant Home of Saltillo, the Fray Bartolomé de Las Casas Center for Human Rights, the Miguel Agustín Pro Juárez Center for Human Rights, and the National Center for Social Communication (Cencos), among other groups.

Guerrero: NGOs call on Peña Nieto to observe the sentences on Inés Fernández and Valentina Rosendo (2 May 2013)