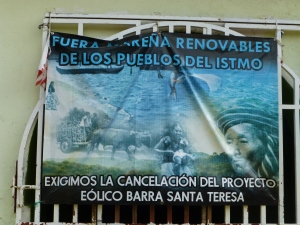 On 9 October, the judge of the 7th District declared a new motion in favor of the communards of San Dionisio del Mar ordering the temporary suspension of the construction of the wind-energy park being promoted by the multinational consortium Mareña Renewables in the Barra de Santa Teresa, land which belongs to the municipality in question.

According to declarations from the Assembly of Indigenous Peoples of the Isthmus in Defense of Land and Territory (APIIDTT), “[t]his is a victory which corresponds to the struggle for the respect of the land and the rights of indigenous peoples.  We demand that all authorities involved in the wind-energy project San Dionisio del Mar and the Mareña Renewables consortium observe with the suspension that has been ordered.”

In other news, the Popular Assembly of the Juchiteco Peoples (APPJ) has newly denounced the constant climate of aggressions, death-threats, and intimidation suffered by its members at the hands of persons linked to the Fenosa Natural Gas corporation.  “Armed types keep circling the homes of APPJ comrades,” notes Mariano López, spokesperson for APPJ.

Furthermore, reported Mariano López, members of Peace Brigades International (PBI) have visited the locale and assessed the damages suffered by the resistance camp erected by the APPJ against the construction of the Bii Hioxho wind-energy park of Fenosa Natural Gas; this camp was burned down on 15 October.  According to the profile of the Juchitán Assembly on Facebook, on 27 October, members of the APPJ began work to rebuild the camp which had been devastated by flames.

Oaxaca: Attacks on those opposed to the wind-energy park in the Tehuantepec Isthmus (4 August 2013)

Oaxaca: Relaunching of the Totopo Communal Radio and attempted kidnapping of APPJ spokesperson

Within the mark of the activities being prepared by the Popular Assembly of the Juchiteco People (APPJ) to observe the 147th anniversary of the Battle of Juchitán against French invaders, on 4 and 5 September was announced the relaunching of the Totopo Communal Radio.  At this event, beyond the participation of different musical groups, the conclusions of investigation “Totopo in the Air: Radio and Communality in Oaxaca, Mexico” were shared, this having been written by anthropologist Dr. Elena Nava.

Totopo Radio, located in the Seventh Section of Juchitán de Zaragoza, a fishing community, has been accompanying since its founding in 2006 the resistance movement against wind-energy projects planned for the Tehuantepec Isthmsu: “Our struggle is for the reappropriation of our word, our spaces, and the defense of our Zapotec culture and the autonomy of our peoples.”

It should be mentioned that on 26 March, following the attempted displacement by police of the sit-in maintained by the APPJ at the access-road to Playa Vicente, where the Fenosa Natural Gas firm seeks to build the Bii Hioxho wind-energy installation, a group of individuals entered the radio’s offices, robbing the transmitter and cutting the electricity cables.

In other news, on 3 September, Mariano López, APPJ spokesperson, suffered an attempted kidnapping in the streets of central Juchitán.  Four individuals in a Nissan truck forced Mariano aboard, who then succeeded in escaping to a local store, where he awaited other members of the APPJ.  Mariano López, like other APPJ members, has been denouncing the numerous acts of intimidation, death-threats, and attacks related to his opposition to the construction of the Bii Hioxho wind-energy park in the communal lands of Juchitán.

Oaxaca: Attacks on those opposed to the wind-energy park in the Tehuantepec Isthmus (4 August 2013)

Oaxaca: Denunciation of wave of attacks against journalists and activists (21 July 2013)