Guerrero: Tlachinollan dedicates its XXI activity report to parents of the disappeared from Ayotzinapa 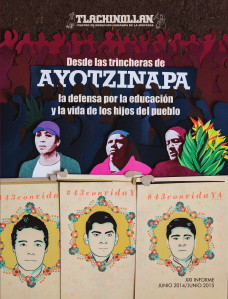 On Saturday 29 August, with the participation of some 3000 persons, the Tlachinollan Mountain Center for Human Rights celebrated its XXI anniversary in the city of Tlapa de Comonfort, Guerrero. Tlachinollan dedicated its activity report, entitled From the Trenches of Ayotzinapa, the Defense of Education and the Lives of the Children of the People, to the mothers and fathers of the 43 disappeared students from the Isidro Burgos Rural Normal School of Ayotzinapa. Due to the events of 26 September 2014, “we left aside being just an office of lawyers and accompaniers to fully join the struggle of this exemplary movement,” said dijo Abel Barrera, director of Tlachinollan. He spoke of a movement that has “unmasked the reality of this country in which the military, parties, and firms collude with organized crime.”

Beyond this, he denounced that there exists a systematic pattern of attacks on the rural normal schools, particularly Ayotzinapa, and that, nearly a year after the acts, not one legal case has been initiated due to the forcible disappeared, nor has the possible responsibility of the 27th Infantry Batallion of Iguala for the crimes, which also included six other executions and torture. The representative of the UN High Commissioner’s Office in Mexico for Human Rights, Jesús Peña Palacios, indicated that “the State should never stop seeking out the disappeared until they are found.” A father of one of the 43 disappeared, Mario César González, also participated, saying that not knowing where his son causes him great despair, and that it is a sort of pain he would not wish anyone else to experience. The event ended with a march for the Ayotzinapa case toward the center of Tlapa, where a rally was held that incorporated the participation of many people.