The displaced Triqui families who on 26 January sought to return to their communities of origin announced on 7 February that they will newly install themselves in a sit-in in front of the Palace of Governance in Oaxaca de Juárez, due to disagreement among them to return in small groups, in accordance with the communal assembly held in San Juan Copala on 4 February.

Reina Martínez Flores, spokesperson for the Movement for Triqui Unification and Struggle-Independent (MULTI), reported that the 135 persons who have been awarded precautionary measures by the Inter-American Commission on Human Rights (IACHR) have installed a camp in the community of Yosoyuxi, seeking to return.

An assembly was held on 29 January and another on 4 February, but the only suggestion made was that they return in groups of five families each week, a proposal that was rejected, as the Triqui families would like all to return at the same time.  “They asked us to sign a letter of commitment to return slowly every 15 days, and we cannot tolerate that,” said Martínez Flores.  She stressed that the displaced Triquis cannot accept the conditions suggested by Antonio Cruz García, alias “Toño Pájaro,” who is accused of being one of the principal authors of the crimes in the region.  The spokesperson added also that during the march from Yucudaa to the state capital Triquis would demand that the state government ensure them security guarantees for their return.

Oaxaca: Triquis return to their communities after 16 months of sit-in (8 February 2012)

Oaxaca: Eurodeputies in the case of Cariño and Jaakkola (17 October 2011)

Oaxaca: new ambush in Triqui region against individuals who had been granted precautionary measures by the IACHR (20 October 2010)

Oaxaca: Triquis return to their communities following 16 months of sit-in 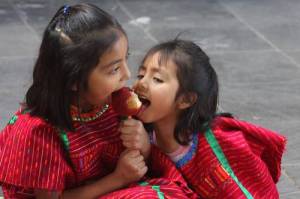 The Triqui indigenous people from the autonomous municipality of San Juan Copala pertaining to the Movement for Triqui Unification and Struggle-Independent (MULTI) called on society to participate in a caravan on 23 January so as to return to their communities after having been displaced 16 months previously by paramilitaries from the Union for the Social Welfare of the Triqui Region (Ubisort).  They had been maintaining a sit-in in front of the Palace of governance in Oaxaca de Juárez since the time of their displacement.

The communiqué read at the press conference expressed that “we have reached some agreements with the state government, and this leads us to think that there exist favorable conditions for our peaceful return to our homes.  We do not understand this to be a provocation.”  The return to their communities was agreed to after 23 work-tables held with the state and federal governments so as to continue with the provisional measures dictated by the Inter-American Commission on Human Rights (IACHR) in their favor.  Reina Martínez Flores, spokesperson for the organization who read the communiqué, clarified that the agreements were reached with the state government only because “the federal government has not demonstrated an actual interest in attending to our demands.”  There was added as well that “We are convinced that this is the only way to strengthen our culture and conserve our history; that our differences in reality do not exist, and that hatred comes from where it has always come: from the powerful, who are assisted by some indigenous persons who have lost their dignity and honor and so lend themselves to cultivating pain among our people, in exchange for some coins.”

In other news, on 1 January there was released an interview in the magazine Contralínea in which a supposed member of the armed group that attacked the caravan that sought to enter the ceremonial center of San Juan Copala to provide humanitarian aid to the besieged populace accuses Antonio Cruz García (also known as Toño Pájaro) and Rufino Juárez Hernández as being the principal perpetrators of the action.  Cruz García was then the “commander” of Ubisort, and he is now at the front of the armed group that since September 2010 has occupied San Juan Copala.  Juárez Hernández was at the time of the attack the political leader of Ubisort; he is now being held on other charges.  In the assault of 27 April 2010 died Alberta Cariño Trujillo, director of the Center of Communal Support Working Together (Cactus), and the Finnish human-rights observer Jyri Jaakkola.  Beyond this, that day there were more than a dozen injured, and two activists and two Contralínea journalists went missing for 60 hours.

Oaxaca: Eurodeputies in the case of Cariño and Jaakkola (17 October 2011)

Oaxaca: new ambush in Triqui region against individuals who had been granted precautionary measures by the IACHR (20 October 2010)

On 12 May Rufino Juárez Hernández, director of Union for Social Welfare in the Triqui Region (UBISORT), was arrested.  He is suspected to be one of those responsible for the grave climate of violence experienced lately in the Triqui region, particularly the autonomous municipality of San Juan Copala.

In accordance with information released by the State Police, Juárez Hernández is accused of being the intellectual author of the murder of Celestino Hernández Cruz, who belongs to the Movement for the Unification of Triqui Struggle-Independent (MULTI).  This was a murder registered on 17 April 2010 in the center of San Juan Copala.

Rufino Juárez is also a suspect in the attack on the humanitarian caravan that was head to San Juan Copala on 27 April 2010 in which were killed Bety Cariño and Jyri Jaakkola.  Days before the departure of the caravan, Juárez Hernández publicly made grave threats to the lives and security of its members.

MULTI and UBISORT, as well as the Movement for Unification of Triqui Struggle (MULT), conflict over local power in the Triqui region, as has been reflected in the high levels of violence employed by militants associated with each of these organizations.  In 2010 at least 36 murders were counted in that region of the state of Oaxaca, all of them the result of different ambushes.

Amnesty International hopes that this action on the part of the State Attorney General’s Office will constitute the beginning of actions taken to dismantle the armed illegal groups found in the region and to put an end to the impunity that has left anxiety among a people that has been subjected to attacks and harassment.  The organization hopes that this judicial action will be the prelude to further clarifications regarding the murder of the human rights defenders Alberta “Bety” Cariño and Jyri Antero Jaakkola as well as clarifications on the presumed ties to be found among municipal and state authorities  and illegal armed groups like UBISORT.

Non-governmental organizations believe this detention is no act of goodwill or concession on the part of the Oaxaca state government but rather the product of national and international pressure to demand justice for the murder of Bety and Jyri.

Oaxaca: new ambush in Triqui region against individuals who had been granted precautionary measures by the IACHR (20 October)

Oaxaca: impunity continues, one year after the murder of Bety Cariño and Jyri Jaakkola 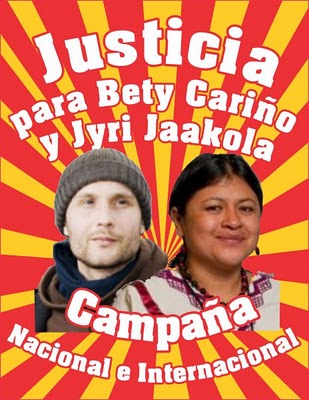 On 27 April 2010, Bety Cariño (human-rights defender and member of the organization Center for Communal Support Working Together-CACTUS) and Jyri Jaakkola (a Finnish human-rights observer) were murdered while participating in a humanitarian caravan en route to San Juan Copala.

Non-governmental organizations, university collectives, and members of the autonomous municipality of San Juan Copala paid the two their respects and denounced the impunity of the case by means of different activities taken up in Oaxaca as elsewhere in the country and the world.  For their part, 250 displaced individuals from San Juan Copala marched to demand justice once again.

Significantly, on the day before the one-year anniversary, Omar Esparza Zárate, husband to Bety and member of the Indigenous Zapatista Agrarian Movement (MAIZ), together with Fernando Urbano Morales of CACTUS, were detained for 8 hours by federal police on the Mexico-Oaxaca highway.  By means of a communiqué, CACTUS denounced that “Beyond arbitrariness, we know that this arrest takes place within a context of violence, harrassment, and repression against human-rights defenders and ‘coincides’ as well with the fact that tomorrow 27 April marks one year of the murder of our comrade Bety Cariño, shot by paramilitary bullets in the humanitarian caravan to the autonomous municipality of San Juan Copala.  This shows the intentionality of the Mexican State to intimidate and terrify those who have since last year demanded justice for the founder of CACTUS and other social activists who have been incarcerated and murdered in this period of mobilization and social repression.”  CACTUS noted that the activities called for to demand justice for the murders of Bety and Jyri would carry on regardless.

During the night of Thursday 29 July was killed Anastasio Juárez Hernández, designated municipal agent of San Juan Copalá by the Union for Social Welfare of the Triqui Region (UBISORT) and brother to the director of the organization, Rufino Juárez Hernández.  According to his brother, Anastasio was killed by gunfire while in his house, located in the center of San Juan Copalá, although representatives of the administration of San Juan Copalá claim the murder to have taken place elsewhere, in Juxtlahuaca. Juárez Hernández blamed the killing on leaders of MULT-I–José Ramírez Flores, Miguel Ángel Álvarez Velasco, Eugenio Martínez López, and Jesús Martínez; he has also accused Alejandro Encinas, deputy of the Democratic Revolutionary Party (PRD), the Catholic Church in Oaxaca, Section 22 of the Oaxacan teachers’ union, and the Popular Assembly of the Peoples of Oaxaca (APPO) of being the “intellectually responsible” for the murder.  Surprisingly, he also extended responsibility for the murder to Ulises Ruiz Ortiz, present governor of the state, whom others have indicated as having strong ties to UBISORT.

Representatives from the autonomous municipality of San Juan Copalá affirmed that Anastasio was killed in the city of Juxtlahuaca following a conflict among PRI-members regarding control of the municipal government there; it is understood that the conflict also involved taxi-drivers and local merchants.  At mid-day on Friday 30 July, between 100 and 300 units of the State Agency of Investigation (AEI) and of the State Preventive Police (PEP) entered the autonomous municipality, as they claimed, to “support the prosecutor and investigators to find the corpse [of Anastasio].” Representatives of the autonomous municipality asserted, for their part, that the police were accompanied by 400 “heavily armed” men from UBISORT, and that both groups “entered with guns blazing,” resulting in the injuring of two girls, aged 15 and 17, and two arrested.  Authorities also denounced that members of MULT joined the attack; they have claimed that the goal of this incursion into San Juan Copalá was to bring the body of Anastasio to the autonomous municipality to make it seem that it had been the residents of Copalá who had killed him.

In a communiqué, the Regional Center for Human Rights Bartolomé Carrasco Briseño (Barca) repudiated the police incursion into San Juan Copalá, calling on civil human-rights organizations to “manifest their rejection of this aggression against the autonomous municipality.” Referring itself to the caravan that attempted to reach San Juan Copalá on 8 June, Barca declared that “it is contradictory that, when security-measures were requested so that the Bety and Jiry [sic] humanitarian caravan could enter to leave basic-goods, the state did not fulfill its responsibility and impeded that the mission be allowed to continue.”