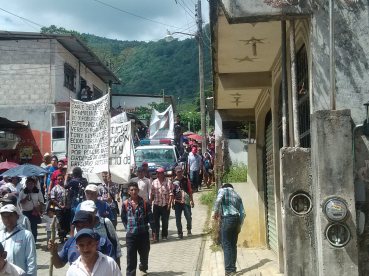 On 18 September, the Global Organization against Torture (OMCT) released an urgent action for the case of a forcible disappearance, torture, and extrajudicial execution, this of Mr. Tony Reynaldo Gutiérrez López, which took place in the Tila municipality. The communique notes that “According to the received information, on 17 July 2015, Mr. Tony Reynaldo Gutiérrez López was arrested by municipal police from Tila as he was en route via public transit to the center of the Petalcingo community, Tila community, Chiapas state […]. On 24 July his corpse was found with signs of cruel torture in a ranch 2km from the Petalcingo community. On 27 July, relatives of Mr. Tony Reynaldo, together with ejidal authorities, members of civil society from Tila, and representatives of the Digna Ochoa Committee denounced the forcible disappearance, torture, and extrajudicial execution in San Cristóbal de Las Casas. However, the penal evidence […] only suggests that there has been launched an investigation into a ‘simple homicide.’” Furthermore, the communique mentions that after having denounced the case, Mrs. Cruz Pérez and other relatives had received death-threats on the part of members of groups who have links to paramilitary groups such as “Peace and Justice.”

In light of this situation, the OMCT requests that civil society write to the Mexican authorities demanding that they immediately adopt the necessary measures to guarantee the security of the relatives and representatives of Tony Gutiérrez, and carry out an immediate, independent, exhaustive, and impartial investigation into the case.

Chiapas: Ejidatarios from Tila denounce confrontation between PVEM and PRI, with 4 injured (21 July 2015)

Chiapas: Preaudience of the Permanent Tribunal of the People in Susuclumil, Tila

On 6 and 7 December 2013 in the community of Susuclumil, Tila, Chiapas, there was held a pre-audience for the Mexico chapter of the People’s Permanent Tribunal (TPP), part of the “Focus on Dirty War – violence, impunity, and lack of access to justice.”  Relatives of victims, survivors, and those displaced from the Northern Zone and Highlands of Chiapas presented their word regarding the “victims of the counter-insurgent and extermination strategies contemplated in the Plan for Chiapas Campaign 94 which was implemented by the Mexican government following the insurrection of the Zapatista Army of National Liberation (EZLN) in 1994, which resulted in dozens of forced disappearances, murders, force displacements, rapes, and massacres; all of these are crimes against humanity which continue to go unpunished.”

In the event, there were presented testimonies regarding the extrajudicial executions and forced disappearances committed during the second half of the 1990s in the zone below Tila, in addition to the forced displacements of the communities of Chuctiejá, Miguel Alemán, Jolnixtié I Sección, Masojá Shuchá, El Limar, and Masojá Grande. The Fray Bartolomé de Las Casas Center for Human Rights has documented 85 extrajudicial executions, 35 forced disappearances, and at least 3500 displaced persons during this time in the northern zone of Chiapas.

The ruling of the TPP, also presented in a press-conference in San Cristobal de las Casas on 9 December, stresses that “We have heard the pain, fear, and injustice of the looting experienced and suffered by the survivors of extrajudicial executions, torture, forced disappearances, forced displacement, rape, looting of resources and land as a consequence of the actions taken by the Mexican government […].  The Mexican State is responsible at the three levels of government, as originating in the security forces at the state, municipal, and Army levels, for they gave support and economic aid to paramilitary groups, particularly the grouping named ‘Development, Peace, and Justice’ […].  From the evidence which speak to these human-rights violations, crimes against humanity and genocide can be seen in the policies exercised against the indigenous Ch’ol, Tzotzil, and Tseltal peoples.  These actions continue to the present day, when we celebrate this pre-audience.”

Chiapas: Invitation to attend the preaudience “Meeting for justice and truth” in Susuclumil, Tila municipality (8 December 2013)

Chiapas: PUDEE denounces “climate of violence” generated by the CFE in the zone below Tila (11 de abril de 2013)

Chiapas: 16 years of impunity in the case of the forced disappearance of Minerva Guadalupe Pérez Torres (25 June 2012)

Chiapas: in Masojá Shucjá, memory and demand for justice for the victims of paramilitaries in 1995 and 1996 (7 October 2010)