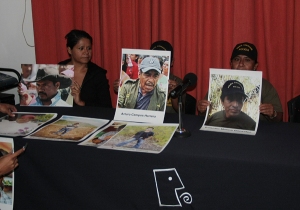 On 4 September, a press-conference was held in Mexico City as part of the activities of the Women’s Committee #FreeNestora which seeks the liberation of Nestora Salgado and other prisoners belonging to the Communal Police of the Regional Coordination of Communal Authorities (CRAC-PC) in Guerrero.

Mothers, daughters, and wives of the communal police officers who have been imprisoned were present, as was a delegation of women from the CRAC-PC, which announced its formal affiliation with the #FreeNestora Women’s Committee, which was founded in August to demand Salgado’s release. Nestora Salgado is being held in a maximum-security prison in Tepic, Nayarit.  Though the federal charges she had faced were dropped in April, it has been denounced that the state government of Aguirre Rivero has added further charges to her on four separate occasions, including 48 kidnappings, though “no one knows who these people are who were supposedly kidnapped.”

Other irregularities and violations of due process were denounced, including the conditions faced by the imprisoned communal leaders.  Also present at the event was the Front of Resistance of Los Ángeles, which shared letters from two senators and seven congressional representatives from the U.S. that called on Secretary of State John Kerry to immediately attend to the case of Nestora Salgado.

Beyond this, there was denounced the lack of adequate response to the demands of the victims of tropical storm Manuel (2013).  Edith Herrera, member of CRAC-PC, denounced that the aid promised by the government has not arrived to the Mountain region of Guerrero.  She claimed that more than 129 billion pesos for the “New Guerrero” plan were used for “political means,” leaving the region “abandoned [and] plundered.”  She indicated furthermore that, with the Crusade against hunger, soldiers entered several communities on the pretext of installing communal eateries.  Since August, greater conditions have been placed on women who benefit from the “Opportunities” welfare program, because several women had been injected with contraceptives as a condition.  The claim is that this means amounts to an “extermination” of the people.

Guerrero/National: Emergence of Committee of Women for the Liberty of Nestora Salgado (2 September 2014)

Guerrero: soldiers and policemen burst into the La Concepción Commmunity after a Cecop assembly in which the case of Marco Antonio Muñoz Suástegui was reported on (29 August 2014)

During the week of official visit to Mexico by the UN Special Rapporteur on the Right to Food, Oliver De Shutter met in Chiapas with campesino groups and NGOs that denounced that in the state there operate economic policies that favor the free market with regard to rural development, as stipulated by the North American Free Trade Agreement (NAFTA).  They affirmed that this has contributed to the fact that the state is no longer the principal producer of maize in the country, instead becoming a state of transit for producing and importing firms, which amounts to a loss of food sovereignty that affects hundreds of thousands of indigenous and campesino families.

The Rapporteur, who also visited the El Pinar Sustainable Rural City, encountered in vivo the denunciations and proposals of the organizations (among them those of maize producers) that accused the State of facilitating the experimental cultivation of transgenic maize in the north of Mexico and the welcoming of the Monsanto corporation via an agreement recently signed between the state government and the foundation Fundar, related to the multinational in Chiapas.  Coffee-workers also declared that the firm AMSA, associated with Nestlé, is promoting a variety of transgenic coffee.

Juan Velasco, from the cooperative Chol Xumulhá, indicated that “the production of maize is basic for self-development and alimentation, but in any case the tendency among the people is commercial agricultural production–coffee, for example–which can constitute an important source of income for campesinos, but does not resolve problems of sustenance.”

Dr. Marcos Arana, from the National Institute on Nutrition and the Center for Training for Campesinos (CCESC), noted that “it would be necessary to undertake an evaluation of the impact of Rural Cities that be external and independent which would investigate the consequences for the people affected.  Chiapas has become a state that expels populations.  It is estimated that in recent years, between 8 and 10% of the population of Chiapas has migrated to the United States, Cancún, and Ciudad Juárez.  This is a symptom of the abandonment in which rural populations find themselves.”  He also announced that more than 80% of the children of Chiapas suffer from nutritional problems such as obesity and malnutrition.

The organizations agreed that food culture is in a process of erosion.  They indicated that in indigenous communities soda and assorted items are cheapter than water and milk, resulting in massive increases in the consumption of such among the indigenous, particularly those who have limited access to the waters of rivers.

Among the proposals that the civil-society organizations presented to the Rapporteur was the importance of prohibiting the cultivation of transgenic maize and instead promoting indigenous, familial, small-scale agriculture, based in traditional knowledge of the management of agrosystems and the incorporation of natural and organic materials.

The efficacy of subsidy programs such as Oportunidades and Procampo was also questioned, given that they do not reach the most remote communities: “It is clear that these programs and others should be designed with human rights as a base, and this is not only an argument: these programs cannot be based in charity but are rather the rights of persons,” concluded the UN functionary.  De Shutter observed that it is clear that the Rural Cities program attends to the consequences of populational dispersal, but not to the causes, such as distribution of land and lack of employment, as indicated by the organizations.  The Special Rapporteur warned that, if present public policies be continued, Mexico will need to import 80% of its food, with campesinos continuing to abandon their lands.