Chiapas: Invitation to attend the preaudience “Meeting for justice and truth” in Susuclumil, Tila municipality 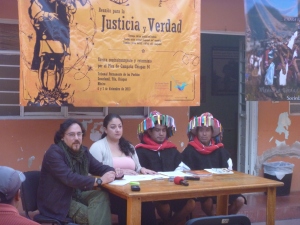 On 6 and 7 December 2013, in the community of Susuclumil, Tila municipality, popular, indigenous, human rights, and victims’ organizations together with persons who participate in the “Axle of Dirty War including Violence, Impunity, and Lack of Access to Justice” from the Permanent Tribunal of the People (TPP) Mexico chapter will meet with witnesses, survivors, and relatives of the communities of the Northern Zone, the Lacandona Jungle, and the Highlands of Chiapas to discuss the strategy of counter-insurgent war and extermination resulting from the application of the Plan for Campaign Chiapas 94.  The goal of the meeting is to denounce and give voice to the serious human-rights violations that the Mexican State has committed against the people of Mexico, especially the indigenous peoples of Chiapas.

Chiapas: PUDEE denounces “climate of violence” generated by the CFE in the zone below Tila (11 de abril de 2013)

Chiapas: 16 years of impunity in the case of the forced disappearance of Minerva Guadalupe Pérez Torres (25 June 2012)

Chiapas: in Masojá Shucjá, memory and demand for justice for the victims of paramilitaries in 1995 and 1996 (7 October 2010)