Chiapas: Pilgrimage of the Believing People ends in Tuxtla Gutiérrez after a four-day journey 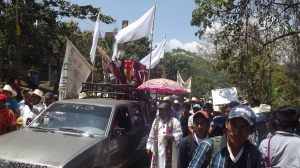 Pilgrimage of the Believing People (@SIPAZ)

On 26 March, the pilgrimage held by the Believing People ended, having begun in Simojovel four days prior.  Its close came after 120 kilometers were covered by foot and the pilgrimage arrived in Tuxtla Gutiérrez.  This peaceful action was born through a series of demands that include the closure of bars, an end to murders, and the abolition of prostitution, drug-trafficking, and narco-politicians.  For two years, these demands have led to a series of pilgrimages and actions carried out in Simojovel to denounce the situation of insecurity in which the municipality finds itself.  The federal and Chiapas state governments have been absent while the death-threats have worsened against the priest of Simojovel, Marcelo Peréz Peréz, and the rest of the clerical staff.

Before the march arrived in Tuxtla, the Secretary of Governance Eduardo Ramírez Aguilar publicly expressed that the Chiapas state government was disposed to set up a negotiation table with the Believing People, to “specify and evaluate a just response to their demands.”

Chiapas: New threats against members of the Believing People in Simojovel after their fifth pilgrimage demanding security and peace (12 November de 2014)

Chiapas: Beginning of grand pilgrimage of the Believing People from Simojovel 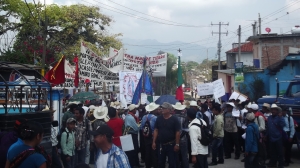 On Monday 23 March, more than 5,000 members of the Believing People from Simojovel–an organizational process associated with the San Cristóbal de Las Casas diocese–undertook a grand pilgrimage (Easter Via Crucis), leaving from this city to arrive in the Chiapas state capital, Tuxtla Gutiérrez, on 26 March.  Through this peaceful mobilization, they seek to obtain greater security in the region, the closure of cantinas and brothels, an effective campaign against alcoholism and drug abuse, and an end to corruption.  Equally, they have pronounced themselves in defense of their priest, Marcelo Pérez Pérez, and the members of the parish council who have received threats due to their support of these demands.  In this sense, the Fray Bartolomé de Las Casas Center for Human Rights requested precautionary measures from the Inter-American Commission on Human Rights (IACHR) to guarantee their protection.

This first day, the pilgrims covered approximately 45 kilometers, stopping to sleep in Bochil before continuing on in the direction of Ixtapa, the destination for the second day of the pilgrimage.  In total, they plan to walk over 120 kilometers.

Chiapas: New threats against members of the Believing People in Simojovel after their fifth pilgrimage demanding security and peace (12 November de 2014)

Return of the displaced to Puebla Colony (@SIPAZ)

On 22 April, in observance of the monthly commemoration of the Acteal massacre (1997), the Las Abejas Civil Society challenged the Mexican justice system by calling into question the responsibility of the two persons arrested in the Puebla Colony on the charge of burning the home of one of the ejidal members who were at that time displaced in Acteal.  Referring to the case of the three prisoners who were recently released, they affirmed that “we think that the government is acting in the same way as with the three persons from Simojovel […].  The three were accused of fabricated charges and were tortured as though they weren’t human […].  They were unjustly punished.  Would this be because as indigenous persons they discriminate against us and insult us with all these cruel and inhuman acts, treating as though we were not human.”  They remarked that “indeed, they have not arrested those who kidnapped Father Manuel Pérez Gómez” in Puebla in August of last year.  They asked, “Would this be because this is the custom of the government, to arrest rapidly those who are innocent and do nothing to those who are in fact culpable?”

With regard to the return of the displaced from the Puebla Ejido on 14 April, the Las Abejas Civil Society denounced that “this was a return without justice, a return lacking the security conditions so that they could return to their homes; this return does not imply that the problem has now been resolved.  It is only because it was very difficult to live in camps that our brothers decided to return.  These 17 families now returned have experienced displacement twice,” previously in 1997.  The Las Abejas indicated that in this sense, the Secretary General of Governance, Eduardo Ramírez Aguilar, warned that, if problems continued, “what will follow will not be dialogue but instead application of the law.”  The spokesperson added that Las Abejas would not accept “this climate of injustice” and would continue denouncing and seeking “true Justice and Peace.”  The Society requested that the ejidal commissioner of the Puebla ejido “build peace and unity among all members of the community without regard to religion or political organization, because we are all children of God.  Those who recognize God’s word should not be violent with their brothers or make false accusations; they should instead love all and respect their human rights.”

Chiapas: those displaced from the Puebla ejido return to their community (26 April 2014)

Chiapas: “return without justice” of those displaced from the Puebla ejido (26 April 2014)

Chiapas: Arrest of those presumed responsible for the burning of a house in the Puebla Colony an “insult to the displaced” (Las Abejas Civil Society) (30 March 2014)

Chiapas: House of displaced family is burned down in Puebla Colony, Chenalhó. Two are arrested (16 March 2014) 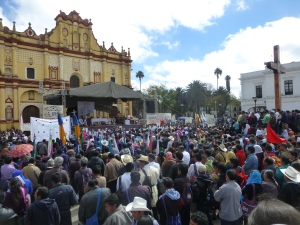 Pilgrimage for Mother Earth Congress. Photo @SIPAZ
In observance of the third anniversary of the death of bishop Samuel Ruíz García and the commemoration of the 40 years since the founding of the Indigenous Congress in 1974, in San Cristóbal de las Casas from 22 to 24 January took place the Pastoral Diocene Mother Earth.  At the event close to a thousand people participating, hailing from different parishes of the state of Chiapas, as well as guests invited from other parts of the continent.

Among the principal goals of the Congress were to address the present environmental situation and to “propose agreements and actions to promote her defense and care.”

Among the agreements taken by those participating in the Congress were the work of raising awareness among families and communities regarding the existing problems, to organize communities to care for and defend Mother Earth, to pursue unity among political, ideological, and religious, differences, and to articulate and reorganize all the parishes to observe the agreements taken at the Congress.  In this way, it was decided to block mining operations and governmental policies which negatively affect the interests of communities: “We oppose mega-projects and devastating mineral exploitation.  We oppose the structural reforms proposed by the government to promote the interests of the dominant classes, in opposition to the people.  We pronounce ourselves in resistance to these more than 20 years of neoliberal agrarian reform which has ignored us completely as indigenous peoples, campesino communities, and Mexicans […].  Given the power of the transnational firms and their accomplice governments and allies, who seek to accumulate land and the resources of the air, soil, and subsoils, given to us by God, it is necessary that we realize the importance of resisting them…”

Lastly, on 25 January, the diocene organization the Believing People carried out a pilgrimage in the streets of San Cristóbal de las Casas that ended with a homily in the Peace Plaza, as presided over by the bishops Felipe Arizmendi Esquivel and Enrique Díaz Díaz.  Those present recalled the work of Samuel Ruiz and expressed their concern for the problems affecting Mother Earth.