Chiapas: San Sebastián Bachajón ejido denounces a death and peaceful marches against the “looting of territory”

Logo from the Viva Bachajón blog

Members of the San Sebastián Bachajón ejido, Chilón municipality, reported that on 20 May Delmar Feliciano Méndez, 17 years of age and an adherent to the Sixth Declaration of the Lacandon Jungle, died by drowning when two municipal police patrols pursued him until he fell into the river. The ejidatari@s in resistance demadned justice for the death of Delmar Feliciano and expressed that his struggle for the defense of the land and territory will not stop.

Similarly, they published a note announcing that on 29 and 30 May, they would mobilize themselves peacefully to protest “the plundering of our territory and the murders committed by the bad government of Enrique Peña Nieto and Manuel Velasco Coello,” given that “they care nothing about murdering and forcibly disappearing students like our comrades from Ayotzinapa, the teacher comrade Galeano, Juan Vázquez Guzmán, and Juan Carlos Gomez Silvano. Their idea is to sow terror in the communities to continue doing their Narco-State big business,” they added. In addition, they demand “the liberation of our prisoners in Yajalón, JUAN ANTONIO GOMEZ SILVANO, MARIO AGUILAR SILVANO and ROBERTO GOMEZ HERNANDEZ; prisoners in Playas de Catazajá, SANTIAGO MORENO PEREZ and EMILIO JIMENEZ GOMEZ; and our prisoner in Amate, ESTEBAN GOMEZ JIMENEZ.”

Chiapas: Commemoration of 2 years since the murder of Juan Vázquez Guzmán in San Sebastián Bachajón (28 April 2015) 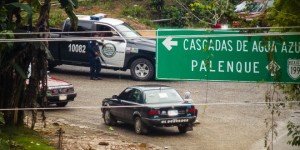 On 21 March, ejidatarios from San Sebastián Bachajón denounced that more than 600 state security forces burned down the regional headquarters of San Sebastián, with the participation of the ejidal commission and the security council.  They explaiend that “after the violent displacement of 9 January 2015, we founded a regional headquarters for San Sebastián to continue caring for the lands and demand the withdrawal of the bad government.  We will continue, as we are indigenous to these lands, and we will not allow the bad government come to rule over the people.”  They also indicated that the group from the ejidal commission “has blockaded the highway between Ocosingo and Palenque at the Agua Azul crossing in an attempt to blame us for the blockade.  Also, these stooges from the bad government are cutting down trees, and we know that they seek to fabricate crimes of ecocide with which to imprison the autonomous authorities of our organization.”

They demanded “the withdrawal of public forces from our lands, which have been plundered since February 2011, and of the National Commission on Protected Natural Areas,” besides the “release of our political prisoners Juan Antonio Gómez Silvano, Mario Aguilar Silvano, and Roberto Gómez Hernández, and of the unjustly imprisoned comrades Santiago Moreno Perez, Emilio Jimenez Gomez, and Esteban Gomez Jimenez.”

Beyond this, two members of autonomous-media collectives denounced having been attacked by the ejidal commissioner’s group of San Sebastián Bachajón. They reported that they were surrounded, arrested, beaten, and threatened with machetes, so that they would hand over a Canon 70D camera and a tripod on 21 March, when they sought to document the displacement and arson of the regional headquarters.  Beyond this, they indicated that, upon passing the control-point and continuing toward the regional autonomous headquarters of San Sebastián, they found four state police trucks and more than 200 “officialists armed with machetes, some of them inebriated.”

On 14 February the adherents to the Sixth Declaration of the Lacandon Jungle from the San Sebastián Bachajon ejido published a new communique, in which they denounce that “the bad government is using a strategy with supposed tourist firms to create an environment of persecution against the indigenous communities, especially our organization, as we see in the imposition of false charges (highway robbery and organized crime) to defame our struggle, as if we were common criminals or thugs!  It is for this reason that they send evermore police to our region of San Sebastian, which is near the Agua Azul crossroads on the highway between Ocosingo and Palenque.”  They demanded that “the three levels of the bad government respect the organized peoples and communities […], the retreat of public security forces from our lands that have been taken since February 2011, as well as the withdrawal of the National Commission on Protected Natural Areas,” in addition to the release of the prisoners Juan Antonio Gómez Silvano, Mario Aguilar Silvano, Roberto Gómez Hernández, Santiago Moreno Perez, Emilio Jimenez Gomez, and Esteban Gomez Jimenez. 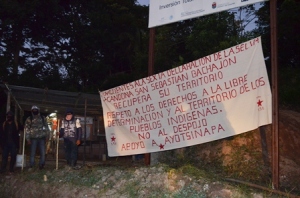 On 21 December, more than 300 persons from the San Sebastián Bachajón ejido peacefully recovered the lands which belong to the ejido within the Chilón municipality on which are located the access-point to the Agua Azul waterfalls eco-tourist center.  In a communique, the ejidatari@s reported that they had decided in an assembly to recover this space, given that these had been “plundered by the bad government since 2 February 2011 with the complicity of the ejidal commissioner of San Sebastián Bachajón,” thus making reference to the control-point that had been administered by the ejidatari@s since September 2009 until the time in which they were displaced, leaving one dead, at least 2 injured, and 117 arrested.  Subsequently, the National Commission for Protected Natural Areas (CONANP) installed its own control-point, and the Institute for Civil Protection (IPC) and the Secretary for Citizen Security and Protection (SSyPC) established a permanent presence at the entrance of the eco-tourist center.

The ejidatarios in their communique added a note regarding more recent events: “the bad government cannot put an end to this struggle; it is for this reason that they attack us so much and even killed Juan Vázquez Guzmán on 24 April 2013 and our comrade Juan Carlos Gómez Silvano on 21 March 2014.  It is for this reason that we have there comrades imprisoned in Yajalón, Chiapas: Juan Antonio Gómez Silvano, Mario Aguilar Silvano, and Roberto Gómez Hernández, who were tortured by the municipal police of Chilón and the Indigenous Public Minister of Ocosingo, Lic. Rodolfo Gómez Gutiérrez, who placed a pistol at the head of Mario Aguilar Silvano as well as a bag on top of his head.”

Given that these are vacation dates, it is feared that a displacement operation will follow that could be violent.

Chiapas: Sit-in of the Front of Ejidos in Resistance in San Cristóbal de Las Casas (6 January 2012)