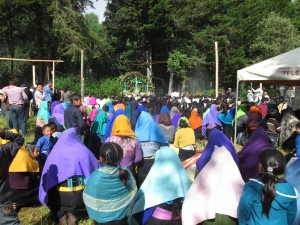 On 12 October, 900 people met in the Los Llanos ejido, San Cristóbal de Las Casas (SCLC) municipality, to celebrate the “522 years of indigenous resistance before the European invasion,” and to express their rejection of the planned SCLC-Palenque highway that would pass through their lands.  Following the invitation that was carried out by ejidatarios from Los Llanos on 21 September, those present affirmed that the highway “does not bring development for us indigenous peoples, but only death, depression, and division.  The money goes to the rich transnational [corporations].”

Collectives and civil organizations attended the event, in addition to the brigade of solidarity with Bachajón from the Network against Repression and for Solidarity.  The Otomí people from San Francisco Xochicuautla, Mexico State, who similarly oppose the Toluca-Naucalpan highway, sent a letter in solidarity.

Ricardo Lagunes, the lawyer who accompanies the legal process of the Los Llanos ejido, denounced that there was no free, prior, and informed consent in the case, as is demanded by the international treaties that Mexico has signed, in order to avoid the situation wherein indigenous peoples are affected by projects in their territories over which they have no say.  He recalled that the announcement of the construction of the highway was made in November 2013, such that the community requested a legal motion at the beginning of 2014.  The official response was to deny that the highway would damage the lands of Los Llanos, thus allowing judges to bury the motion and leave the communities vulnerable.

Lastly, the Council for Vigilance from La Candelaria has organized a pilgrimage for 25 November in San Cristóbal de Las Casas to mark International Day for the Elimination of Violence against Women.

Chiapas: Ejidatarios from Candelaria express their opposition to the construction of the San Cristóbal-Palenque highway (16 September 2014)