National: Lack of confidence and strong criticisms of the Second Governmental Report presented by EPN 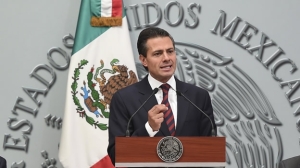 On 1 September, President Enrique Peña Nieto (EPN) presented to the Congress his second governmental report after 21 months of management that have seen the approval of 11 structural reforms and negative results in terms of security, economic growth, and employment rate, according to official statistics and experts.

The Movement More than 131 together with Youth Amidst the National Emergency, Migration Table 132, Services and Assessment for Peace (SERAPAZ), the Movement for Peace with Justice and Dignity, and Article 19 launched a video to expose “the questions that President Enrique Peña Nieto’s report omitted” using the hashtag #MexicoHasNoPresident.  SERAPAZ warned that, two years into his administration, more than 23,640 murders have been registered, in addition to 22,322 victims forcibly disappeared.  For its part, Migration 132 stressed that the Southern Border Strategy recently launched by EPN’s government “seeks only to militarize the border.”  Furthermore, Mexico has no official data regarding disappeared migrants. Article 19 reported that during EPN’s government, seven journalists have been murdered, possibly due to the exercise of their profession; that in 2013, 330 attacks on the press were observed in Mexico, with more than 150 journalists assaulted during the first half of 2014.  It noted that “public resources of the State are used to control the editorial line of the communication media.”

Édgar Cortez, from the Mexican Institute on Human Rights and Democracy, indicated that the content of the governmental report is poor, because “it only presents a series of laws and programs as successes, when these are not translated into concrete actions and results” that would result in the observance of these guarantees.  “Neither does it say anything about the great question which has existed since the beginning: impunity.  Nor does it present any strategy for how to combat it,” adding that “it does not deal with serious problems that continue to present themselves in the country,” such as the practice of torture as a means of investigation.  He said that there still are no indications that the government has an effective policy in terms of human rights. José Antonio Lara Duque, coordinator of the Zeferino Ladrillero Center for Human Rights, noted that cases of forcible disappearances, extrajudicial executions, and other human-rights violations continue unabated, since the government has not modified its strategy against organized crime.  Lara Duque observed in addition that, following the approval of the energy reform, a policy will be applied for the imposition of megaprojects that will degrade the rights of ejidtarios and indigenous peoples.