International / National / Guerrero: First report of the Special Follow-up Mechanism of the IACHR to the Ayotzinapa case 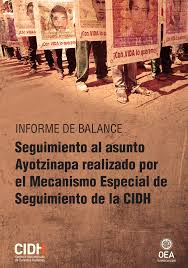 On September 3, almost four years after the disappearance of the 43 students of Ayotzinapa in Iguala, Guerrero, the First Report of the Special Follow-up Mechanism of the Inter-American Commission on Human Rights (IACHR) was presented at the Rural Normal School. The event was attended by Esmeralda Arosemena, rapporteur for Mexico of the IACHR; Luis Ernesto Vargas, commissioner of the IACHR; Paulo Abrāo, executive secretary of the IACHR; Jan Jarab, representative in Mexico of the UN High Commissioner for Human Rights, and Luis Raúl González Pérez, president of the National Commission of Human Rights (CNDH).

In this document, the IACHR confirms its rejection of the “historical truth” that the Mexican government has been defending in the face of what happened. He emphasizes that of the nine telephone numbers belonging to the disappeared students that registered activity on the night of their disappearance, “at least one of them” was found in the possession of a public security official of Guerrero, a fact that has not been investigated and should be so promptly. Likewise, the report points out the possible participation of elements of the Federal Police for what it calls to analyze the activities that the elements of said corporation had in Iguala that day and to resolve the chain of command that ordered their mobilization. Regarding the participation of the military, the IACHR indicates that the contradictions presented by the statements of elements belonging to the 27th Battalion and the photographic material in their possession, which records the detention of the disappeared students, must be clarified. In addition, it requests that the alleged links of various elements of the 27th Battalion with organized crime through arms trafficking or even some relatives with leaders of the Guerreros Unidos Cartel should also be investigated.

For his part, and a few hours after finishing his term as UN High Commissioner for Human Rights, Zeid Ra’ad al Hussein considered that as long as there is no irrefutable knowledge of what happened in Iguala and there is no accountability for the forced disappearance of the 43 students, the case “will remain as an open wound in the minds of Mexicans” and as one of the “most pressing pending issues of the government of Enrique Peña Nieto.” If not resolved, “and if there is no responsibility for one of the most severe episodes we have seen in Mexico in the recent past, these conditions will persist.”

Guerrero/International: New Hearing of Ayotzinapa Case with Inter-American Commission for Human Rights May 21, 2018