Chiapas: March from Suchiate river to denounce abuses against migrants, and beginning of hunger strike 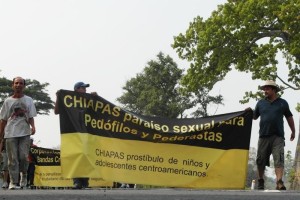 On 16 April, approximately 20 activists and migrants began a march of 290 kilometers from the Suchiate river, following the route taken by the undocumented, to denounce the sexual and labor exploitation to which many Central American migrants are subjected within the southern border region of Mexico.  The march was to end two days later in Arriaga, where the migrants often take the freight train toward the center of the country.

However, the following day, the protest ended in Tapachula, due to the fact that its members had received death-threats “by phone and in person, though we do not know from whom they originate,” declared the organizers.  Ramón Verdugo Sánchez, member of the organization “All for all” to assist street children and migrants, explained that “due to the fact that the security of those who were marching could not be assured, we decided to change the action into a hunger strike, which is something that is more drastic and sacrificial, given that it can exert the same pressure on the authorities so that they fulfill their responsibilities.  We are not asking for the impossible, given that it is their obligation to show that they are working to protect minors in the streets and migrants in transit.”