Chiapas: Violence in Teopisca to force women to attend a PRI rally 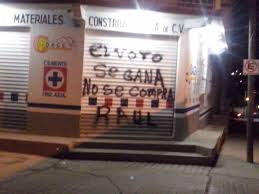 On 27 May, women who benefit from the Próspera governmental welfare program occupied the Teopisca City Hall to protest the Institutional Revolutionary Party (PRI) and its mayoral candidate, as they had been forced to attend a rally from this party, planned for 10am the next day. They were threatened with having their support withdrawn if they did not attend the action, they denounced.

In retaliation, women painted graffiti against the PRI mayoral candidate, Raúl López; they also punctured the PRI bus’ tires and broke its windows. They demand the resignation of the Próspera municipal coordinator, and that the SEDESOL officials suspend political conditions for participation in the program.

In light of these acts, the Chiapas Center for Women’s Right A.C. (CDMCH) denounced “the violence that women face if they receive welfare programs from the political parties and officials of public policy, in exchange for votes, forcing them to join whatever political party to ensure the flow of support.” The CDMCH denounced that the women had been threatened with “having their programs withdrawn if they do not join the party, [which] takes advantage of their impoverished state, amidst the fact that there is no comprehensive attention granted by the State in terms of education, health, housing, and just work.”

The CDMCH has demanded a halt to violence against women, as well as the use of poverty for political ends, being “consequences of the impunity and social backwardness in which thousands of us women and our families live in Chiapas, in terms of the exercise of the right to free and informed voting on 7 June.” 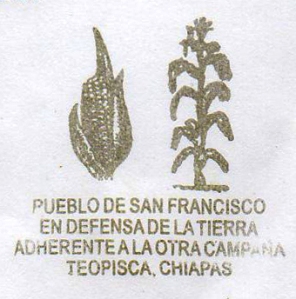 The Organized Group from San Francisco, Teopisca municipality, which adheres to the Sixth Declaration of the EZLN, denounced that on 14 August, José María Trejo Narváez destroyed “the sign indicating our recovered lands by removing the tree located behind this sign, and also on 18 of this same month he was firing his gun,” as they noted in a public denunciation.  The Group continues: “[t]his person bought a plot of land of approximately 20 hectares of the lands that we already possess.  We as the group of campesinos tell you by means of our writing that these lands were already being used and that for this reason no one could buy them.”

Beyond this, a relative of Trejo Narváez, Edilberto Castellanos Domínguez, entered the area on 6 October to cut down trees “within our territory (of recovered lands).”

Lastly, the Organized Group demanded that the government relocate the persons in question, “because they have entered our lands and we do not want aggressive people in our lands.”

Chiapas: Body of campesino leader of the National Organization for Popular Power is found 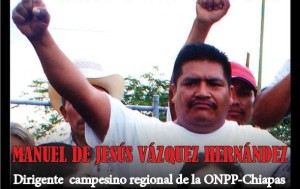 On Tuesday 18 February, the lifeless body of the regional leader of the National Organization for Popular Power (ONPP) was found near Teopisca, Chiapas.

The corpse, found in the municipal dump of the city, showed signs of torture, according to relatives and friends of the former leader.

Manuel de Jesús Vázquez disappeared on Saturday 15 February after leaving his home to visit his father, resident of the same community.  Due to his disappearance, relatives of the victim denounced the act before the Public Ministry,a nd the ONPP released a communique demanding to know the whereabouts of its member, and to wish him luck: “Who has kidnapped our brother Manuel?  Today we fear for his life, because he could have been kidnapped and tortured in clandestine security houses, or even murdered, with his body then appearing afterward as that of a common criminal.”

According to the Fray Bartolomé de Las Casas Center for Human Rights, in the course of the recovery of the body of the dead, officials from the State Attorney General’s Office committed violations to individual rights, given that they failed to observe the basic standards for investigative work in the field.

ONPP-Chiapas defines Manuel as having been a key political and regional leader who defended the rights of his people and land for many years.

Chiapas: Displaced indigenous persons march in Chiapas, demanding a return to their communities

Since 22 January, close to 150 indigenous persons who have been displaced for more than two months in Teopisca due to agrarian conflict began a march toward the capital of Tuxtla Gutiérrez to demand that state authorities guarantee their return to their communities of origin.  Another 250 displaced persons who did not join the march continue residing in Teopisca.  Those manifesting themselves noted at the start of the march that “We demand a solution with peace and justice in our lands and the return to our homes, given that we are displaced from the group San José Las Palmas de las Comunidades de Tzajalha, Balhuits, and Yaxlumilja, Teopisca municipality (…) With this march, we make visible our indignation regarding the numerous acts that have violated our human rights.  Furthermore, we want a humane solution to this, without increasing violence or bringing about future confrontations.” 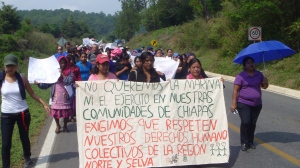 On 11 May around 400 persons, a majority of them women, carried out a march from the Teopisca municipality to Amatenango del Valle to protest against militarization, high electricity-prices charged by the Federal Electricity Commission (CFE), and mineral exploitation.

The members of different organizations and municipalities denounced that on 2 February, members of the Secretary of the Navy and the Army took ejidal lands to install a camp without authorization from the owners in the Madronal neighborhood of Amatenango del Valle.  They met in a rally in the central park of Amatenango, where they read several communiqués, one of which notes that “We do not understand what you are doing; you have entered our homes seeking arms and at night you patrol other communities; you take our lands and do not know what you are doing there; we do not need the Army to come care for us.  What we demand is that our autonomy, languages, and cultures as indigenous be respected.”