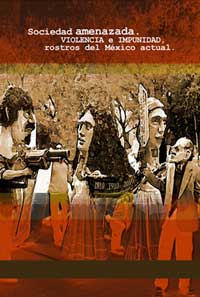 In early March, the Centro Prodh published a new report titled “A Society at Risk: Violence and Impunity, the Twin Faces of Mexico.” Given the cases of the past two years (including several that took place in Chiapas), several themes are broached: indigenous women before the justice system, the lack of civil control of the military, the importance of the global and Inter-American systems in demanding that the Mexican government comply with its human rights obligations, the violations of economic, social, cultural and environmental rights—specifically the policies concerning housing and forced evictions provoked at the interest of megaprojects—and the forms of action taken by the state against those who demand, promote and defend human rights.

The executive summary highlights: “In Mexico there is a climate of impunity observable within the justice system, in penitentiaries and in the cases of abuse, detention, harassment, torture and murder of human rights defenders. This is not a new situation, but it has increased with the growing militarization of the country under the pretext of the ‘fight against drug trafficking.’ With the participation of the military in public security there has been an increase in human rights violations; the impunity is reflected in the lack of repercussions for those responsible while violence continues to devastate several regions of the country. The report, ‘A Society at Risk: Violence and Impunity, the Twin Faces of Mexico,’ analyzes the human rights situation from the Centro Prodh’s fields of action in order to demonstrate governmental responsibility in the creation or maintenance of conditions that are currently threatening society.”

Index and introduction to the report

Executive summary of the report (Spanish)