Chiapas: Municipal Government to be Set up in Amatan 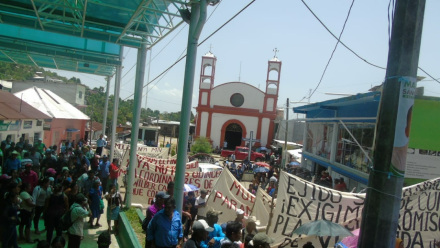 In recent days, it was agreed that a Municipal Government Council will be established in the municipality of Amatan, after a meeting, which was part “of the process of pacification and reconciliation to restore the social fabric”, in which among the participants were leaders of the Movement for Peace, Justice and the Common Good of Amatan (MPJBCA in its Spanish acronym) and the National Coordinator Plan of Ayala, National Movement (CNPA MN in its Spanish acronym) with its lawyers from the Strategic Defense Office in Human Rights (DEDH in its Spanish acronym), Governor Rutilio Escandon, Secretary of Government, Ismael Brito Mazariegos, SEGOB’s Undersecretary of Human Rights, Alejandro Encinas Rodriguez and Aaron Mastache Mondragon, responsible for the Mechanism for the Protection of Human Rights Defenders and Journalists.

According to a statement from the MPJBCA, they agreed that the council will be composed of 18 people. Six of them will be members of the MPJBCA and the 12 other people will be of “other political opinions giving the opportunity for inclusion that is needed.”

They also reported that Alejandro Encinas, “promised on behalf of the Federal Government to assume municipal security and investment of economic resources for basic and social infrastructure for the development of the communities of Amatan, as was similarly declared by Governor Rutilio Escandon.”

Previously, on January 31st, in an extraordinary session, the mayor of Amatan, Manuel de Jesus Carpio Mayorga and his entire cabinet, resigned after accusations that linked them to the murder of human rights defenders Noe Jimenez Pablo and Jorge Santiago Alvarez. In this regard, the MPJBCA continues to demand “punishment of the material and intellectual authors of the forced disappearance, torture and murder.”

It should be remembered that, according to the Cuarto Poder, in December of last year, Mario Carlos Culebro Velasco, then Secretary of Government, stated that “it is a minority that has opposed the municipal government functioning and the creation of a municipal council. He clarified that “this is a figure created by the very Congress of the State, not the Executive, and as I understand, the legislators are not willing to nominate municipal councils.”

National / International: UN-DH denounces that 10 Human Rights Defenders have been murdered in Mexico until now in 2018 (September 21, 2018)

This entry was posted on Wednesday, February 13th, 2019 at 5:08 pm and is filed under Announcements, Chiapas, Elections, Indigenous people, Land and Territory, Uncategorized. You can follow any responses to this entry through the RSS 2.0 feed. You can leave a response, or trackback from your own site.