National/International: IACHR Statement on Agreement that May Give Armed Forces Public Security Duties 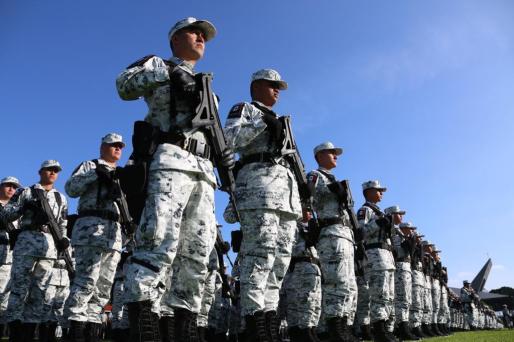 In a statement published on July 25th, the Inter-American Commission on Human Rights (IACHR), gave its position regarding the “Agreement by which the permanent Armed Force is available to carry out security tasks public in an extraordinary, regulated, supervised, subordinate and complementary manner”, adopted in Mexico last May.

It recalled that, among other aspects, said Agreement establishes that, “for a period of five years, the armed forces will carry out public security tasks with the National Guard while said police body develops its structure, capabilities and territorial implantation and that” in support in the performance of public security tasks and “shall observe and respect human rights.”

The IACHR indicated that the Mexican State informed it that “this work had been carried out continuously and without legal basis throughout several administrations prior to the current one, and stressed that, after the term, the armed forces would return to barracks.” It also stated that “various national and international human rights organizations have publicly expressed their concern about the compatibility of the Agreement with international obligations in the field of human rights contracted voluntarily by the Mexican State in relation to public security policies.”

In this context, the IACHR considered it appropriate to “reiterate the commitments of international law in the area of ​​public security of the Mexican State and highlight the standards and recommendations developed within the framework of the inter-American system for the protection of human rights,” including the fact that “as a general rule, the maintenance of internal public order and security are primarily reserved for civilian police forces. However, the armed forces may exceptionally intervene in security tasks as long as their participation is carried out in an extraordinary, subordinate and complementary way, regulated and supervised, these categories being substantive and not only nominal.”

The IACHR recalled that already in its last 2019 Follow-up Report, it found that, “although the National Guard was normatively conceived as a civilian body with police functions, its transitory composition with personnel and a military-type structure, precisely call into question its civil nature and the demilitarization of public security. Likewise, the IACHR pointed out some challenges in relation to creating an independent and impartial system of accountability for the acts of its public security agents, including the armed forces, and transparency in the information of the operations in which lethal force is used.”

For the same reason and “in view of the revision of the Agreement by the SCJN [Supreme Court of Justice of the Nation], the Commission reminds Mexico of the inter-American and international law standards already mentioned, which require public policies on security and combatting crime that prioritize the operation of an efficient institutional structure from a human rights perspective. Likewise, the Commission encourages the State in the implementation of accountability measures for public security operations that respond to international standards and the IACHR’s recommendations on the matter.”