Guerrero: Teacher from Acapulco dies after violent repression of a protest by the Federal Police 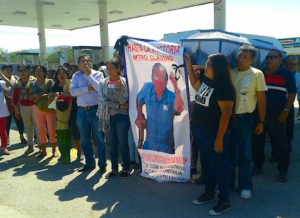 On 25 February, the Guerrero state government confirmed the death of the teacher Claudio Castillo Peña due to cranial trauma, following the conflict between the Federal Police and members of the State Coordination of Educational Workers in Guerrero (CETEG) the day prior in Acapulco.  Raúl Miliani Sabido,  the Secretary for Civil Protection in the state, said in an interview that “unfortunately we do have the confirmation” of Castillo’s death, being 65 years of age.  Castillo Peña belonged to the teachers’ movement of the retired and usually was one of the speakers at the actions organized by the teachers in resistance.  Due to his state of health, the teacher used crutches, and witnesses observe that he could not run to escape the police displacement operation.  The Attorney General of Guerrero State announced on 26 February that the appropriate investigations had begun to investigate and establish the legal responsibilities of the civilian courts.

Testimony from female members of CETEG who had been at the front of the contingent when it was attacked by the Federal Police confirms the sexual abuse of a teacher who has been hospitalized in Cuernavaca, Morelos.  In a communique she relates that during the chase, the police caught up with her “and began to beat me, then I fell.  So they took me to a remote place where they raped me multiple times, hurt me, and caused me to lose consciousness due to so much pain.”

Guerrero: Investigation “based in scientific proof” requested in the Ayotzinapa case (1 March 2015)

Guerrero: Amnesty International accuses PGR of failure to investigate participation of the Army in the Ayotzinapa case (5 February 2015)

This entry was posted on Tuesday, March 10th, 2015 at 1:24 pm and is filed under Disappeared, Guerrero, Human Rights, Human Rights Defenders, Indigenous people, Justice system, Land and Territory, Land rights, Mexico, Paramilitary, Political Prisoners/Prisoner of Conscience, torture, Women, Youth. You can follow any responses to this entry through the RSS 2.0 feed. You can leave a response, or trackback from your own site.