Oaxaca: Ejidos and communities from the Central Valleys declare their territories free of mining operations 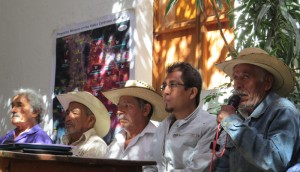 Through this declaration, they demanded that the state and federal government cancel the 18 mining projects, because, as they claimed these projects pollute their cultivated lands. The same document estimates that 90% of the concessions that the government has given to mining companies in the last 10 years have been “conducted without any consultative process incorporate free prior and informed consent in good faith with us peoples who live here.” To support this declaration the peoples called on Convention 169 of the ILO, the UN Declaration on Indigenous Rights, the Mexican Constitution, and communal assemblies, exercising their right to autonomy.

The communities agreed to promote peaceful actions to respect the accord to free their lands of mining operations. The undersigning authorities rejected the violence which took place in San José del Progreso between 2010 and 2012, in which 4 people were killed, 8 injured, and 5 others facing arrest-orders.

Oaxaca: Declaration of rejection of hydroelectric and mining projects in the Coastal region (21 November 2015)

Oaxaca/National: Peaceful protest by COPUDEVER to mark “International Day of Action against Dams and for Rivers, Water, and Life” (28 March 2014)

This entry was posted on Saturday, December 26th, 2015 at 12:18 pm and is filed under Forced Displacement, Human Rights, Human Rights Defenders, impunity, Indigenous people, Justice system, Land and Territory, Land rights, megaprojects, Mexico, Militarization, Mining, Oaxaca, Paramilitary, Peacebuilding, Women, Youth. You can follow any responses to this entry through the RSS 2.0 feed. You can leave a response, or trackback from your own site.