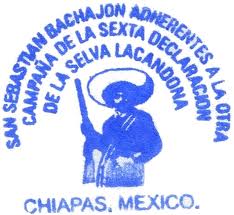 On 29 January, ejidatarios from San Sebastián Bachajón, Chilón municipality, adherents to the Sixth Declaration of the Lacandona Jungle, published a communique which reports that they will maintain their posture of defending their lands and that, toward this end, they have installed a regional headquarters for the ejido between the Agua Azul crossroads at the entrance of the waterfalls of the same name and the limits of the Tumbalá municipality.

They denounced furthermore that since the displacement operation they suffered on 9 January 2015, police presence has been constant, such that they have called on Governor Manuel Velasco Coello to immediately order the withdrawal of public security forces and to discontinue intimidation and repression.

They reported as well that the ejidal commissioner, Alejandro Moreno Gómez, together with his security advisor are organizing shock-groups that “fire into the night with high-caliber weapons,” thus frightening local residents.

They noted lastly that “private meetings are being held between the Chilón delegate Francisco Demeza Hernández and Carlos Jiménez Trujillo, a local deputy, to plan for [more] looting, such that our comrades are guarding the regional headquarters and are charging the quotas at the entrance of the Agua Azul waterfalls.  We hold the three levels of government responsible for any type of attack or confrontation that could develop.”

For his part, the “official” ejidal commissioner of San Sebastián Bachajón, Alejandro Moreno Gómez, has told the media that “at present we are being affected by a group of approximately 100 persons, men and women who hail from different municipalities of the state of Chiapas, adherents to an organization called the Other Campaign or the Sixth Declaration of the Lacandona Jungle, who have violently appropriated ejidal lands […].  We demand respect for the autonomy of the ejido and for non-violence.  They must put down their arms and opt for the path of dialogue and social peace.”

The first report of the caravan of adherents to the Sixth who went to visit San Sebastián Bachajón ein January stresses the attempt made by the ejidal commissioner to “portray these events as an inter-communal conflict that only has to do with the internal politics of the Bachajón community rather than the interests of the government and tourist firms.”