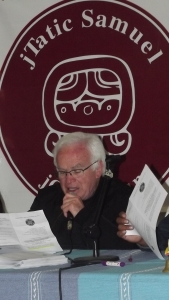 On 23 January, the 2015 public call to propose candidates for the “jTatic Samuel jCanan Lum Award” was launched.  The announcement was made by Monseigneur José Raúl Vera López, bishop of Saltillo and the honorary president of the organizing committee.

The call recalls that the award has the goal of “making known and inspiring the work of women and men, organizations, and collectives that have distinguished themselves by their contribution to the people in the creation of communal and/or regional alternatives, as well as by their work directed at unity and peaceful social transformation […].  We want to recognize their love for the people, their resistance, their service, their search for alternatives amidst the suffering and marginalization of their communities, amidst the destruction of the Earth, the defense of human rights, the defense of the dignity of all, and their struggle for peace, justice, and liberation.”

“jTatic Samuel jCanan Lum” is a charge that the Mons. Samuel Ruíz García received in the community of Amatenango del Valle by Ch’ol, Tojolabal, Tseltal, Tsotsil, and Zoque peoples on 14 October 2009.  There, he was recognized as the protector of their people, who love and defend him for being someone who cares for life, nature, and the Earth.  With reference to the same, the jTatic Samuel Jcanan Lum Award seeks to support individuals or groups and stimulate them by giving voice to their social work.

The awarding of the next wave of Recognitions will take place in January 2016 in San Cristóbal de Las Casas, Chiapas, in observance of the Episcopal Anniversary of jTatic Samuel Ruiz García.

Chiapas: presentation of the jTatic Samuel jCanan Lum Award during the assembly of the Believing People (7 March 2011)