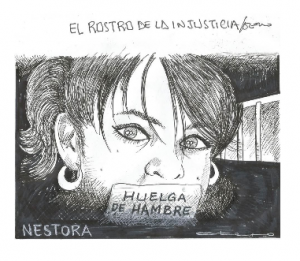 On 5 May, Nestora Salgado García, commander of the Communal Police from Olinalá, who has been imprisoned in a federal institution in Tepic, Nayarit, since August 2013, began a hunger strike amidst the lack of progress in her legal case.  She expressed that she was prepared to die to demand that this process advance: “I do not believe it is just that I will now have spent two years here, with my legal case arrested.  I have never been had the chance to make a broad statement, nor have my accusers ever presented their charges against me.  They have done nothing with me.  I am losing my life and health.”  Her husband, José Luis Ávila Báez, reported that he would sent a report to the Inter-American Commission on Human Rights (IACHR) to denounce that the precautionary measures which were awarded to Nestora Salgado on 28 January still have not been implemented.

Leonel Rivero Rodríguez, Nestora’s counsel, has pressed the federal government to transfer the prisoner somewhere where she can have her health managed and develop the necessary meetings for her legal case to progress.

Meanwhile, governor Rogelio Ortega Martínez affirmed once again that he has newly requested that the state prosecutor review the case for its nullification.  He added that another step could be taken, as the Popular Movement of Guerrero (MPG) had suggested: that is, to say, an amnesty law.

Guerrero: Delay in release for Nestora Salgado; her daughter claims to have been threatened by phone (5 February 2015)

This entry was posted on Saturday, May 16th, 2015 at 1:17 pm and is filed under Guerrero, Human Rights, Human Rights Defenders, Indigenous people, Justice system, Land and Territory, Land rights, Mexico, Militarization, Mining, Paramilitary, Political Prisoners/Prisoner of Conscience. You can follow any responses to this entry through the RSS 2.0 feed. You can leave a response, or trackback from your own site.