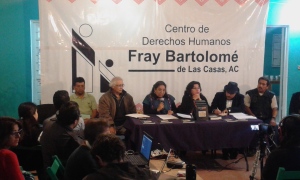 Participation by Estela Barco during presentation of report @ SIPAZ

On 5 November, the Fray Bartolomé de Las Casas Center for Human Rights (CDHFBC) presented its annual report that carries the title “The Human-Rights Insurgency,” which deals with the “perspective, questions, and situations” that the CDHFBC has documented and monitored in Chiapas from March 2014 to March 2015. During the presentation of the document, several members of the directive council of CDHFBC spoke, including Blanca Martínez Bustos, director of the Fray Juan de Larios Center for Human Rights; Jorge Santiago Santiago; Estela Barco Huerta, general coordinator for the Social and Economic Development of Indigenous Mexicans; and the president of the council, jtatik Raúl Vera López, bishop of Saltillo.

The CDHFBC described the present context as a moment that “is a dark time, amidst the implementation of saddening repressive measures that constitute State terrorism, whereby military occupation and the state of siege are normalized. With this, the violations that make up crimes against humanity such as torture, forcible disappearance, extrajudicial executions, femicide, and forcible displacement, among other crimes, are daily occurrences in Chiapas and Mexico.”

The document proclaims the comprehensive defense of human rights that is the work of the CDHFBC. The questions it addressed include torture, impunity, defense of land and territory, as well as the ongoing war context, which in the report corresponds to four chapters: Torture, an implicit negation; A look at the cracks of impunity; War in Chiapas, territory, and peoples; and Reality of war-context.

The CDHFBC expressed that torture “is engrained and generalized in the Mexican justice system, and it is not only denied but even rationalized.” From the perspective of historical memory, remembrance is the principal pillar “of the struggle of victims and their families in the cases of crimes against humanity […]. They collectively protect and transmit memory against forgetting and impunity.” With regard to the “internal armed conflict in Chiapas,” the “communities and organizational processes persist and resist in defense of their autonomy and territory amidst State policies that seek to plunder land, spirit, and culture.” Lastly, the chapter on “Reality” is dedicated to the Zapatista teacher Galeano, who was murdered on 2 May 2014 in La Realidad, official municipality of Las Margaritas, Chiapas.